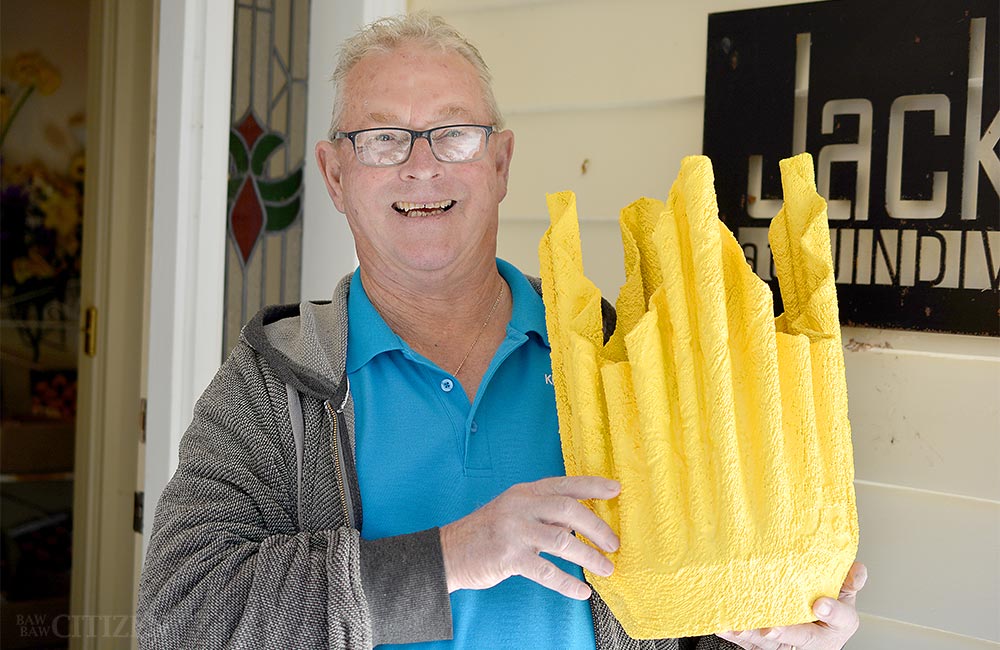 Want to make your garden even greener? Check out these upcycled pots!

This feature was first published in the 17 May 2018 edition of the Baw Baw Citizen.

If you’re not keen on using plastic or new materials in your garden, or simply want something vibrant and unique, Graeme Sandford has the thing for you.

We met Graeme at last month’s Gippsland Rare & Unusual Plant Fair in Jindivick, where he was selling hand made, upcycled pots made from old bath towels and concrete.

“The towels are cut to suit what size design we want, according to the base plate that’s on the bottom to form them,” he said.

“Then the towels are soaked in a concrete solution and hung over the upside down plate.

“They are then hand formed and left to set and cure before being spray painted with an exterior house paint.”

Just a few of Graeme’s pots on display at the Rare Plant Expo.

It sounds fiddly, but apparently the pleats on the pots largely form themselves.

“The vases are the ones that take the time because they have a lot of finer pleats which make them quite time consuming.”

If you think a bath towel pot will need gentle care and take to water like a cat, you’re not alone.

“People say it’s unbelievable,” Graeme said when asked how others react to his work.

“A lot of people find it hard to imagine that they’re going to last outside because they were originally a bath towel, but the towels are well and truly coated with concrete and there’s no cloth exposed.

“They’re fine outdoors. They’re quite durable once coated with concrete.”

Graeme has been upcycling old towels for four and a half years now, originally in Perth but now in Gippsland. But where do all the old towels come from?

“Op shops, friends doing clean-outs, anywhere we can get them,” Graeme said.

Upcycling, where old products are reworked or repurposed, has regained popularity in recent years thanks to fashion and environmental concerns.

Finding new uses for old textiles is important, as Australian Bureau of Statistics data suggests this country sends as much as over half a million tonnes of textiles and leather to landfill every year.

Graeme’s pots help address the side-effects of fast fashion and throw-away attitudes. The more old towels that are made into extravagant pots, the better!

But Graeme doesn’t consider himself an environmentalist; for him the upcycling is just a fun little project.