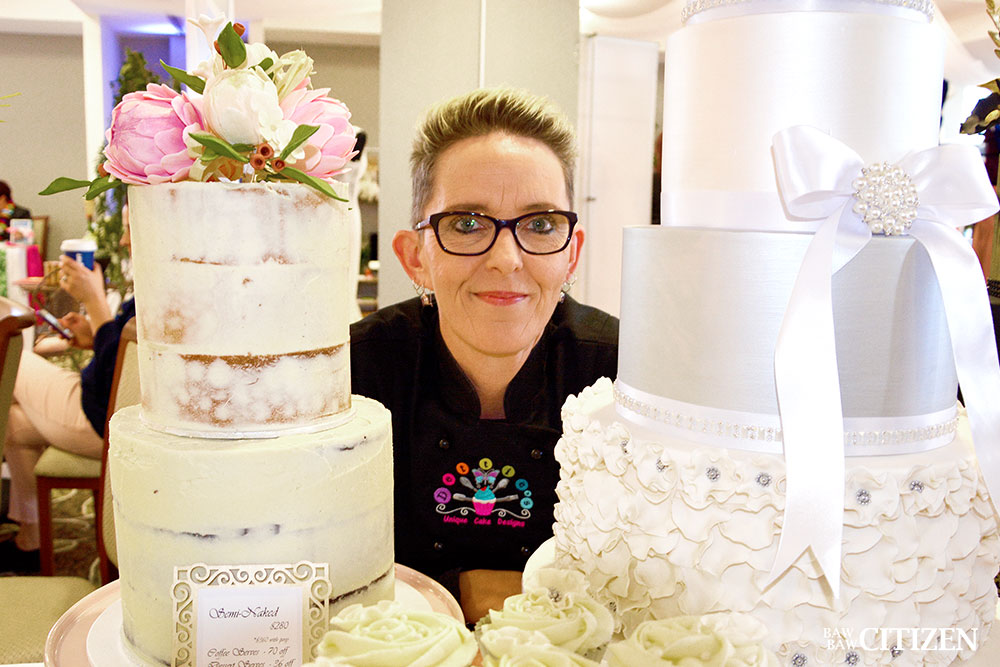 We’re fast approaching wedding season, which had us wondering: what’s in this year? We headed to the Drouin Wedding Expo to find out.

Here’s the short version: vintage, boho (short for bohemian), and informal are in. That shouldn’t come as a surprise to anyone who has even glanced at anything to do with weddings in the last few years, but there were some interesting details too.

Note: this is not a sponsored article.

Let’s start with Bernadette Crick of Dettie’ Unique Cake Designs, who confirmed what we all know.

“Rustic is extremely popular and has been for a long time, and it seems to be hanging around,” she told the Baw Baw Citizen.

“I think a lot of people like the casual style, the flowers, country venues.”

The “country venues” stipulation is key – while the rustic style is popular, Bernadette has noticed it’s more popular in regional areas.

“You do get a lot more top end in the city, so they might go more the vintage style, which is another style which is really popular.”

There is a new trend starting to rise, however, and that is marble effect.

“The marble is just coming in now in wedding cake trends, even though it has been around forever.” 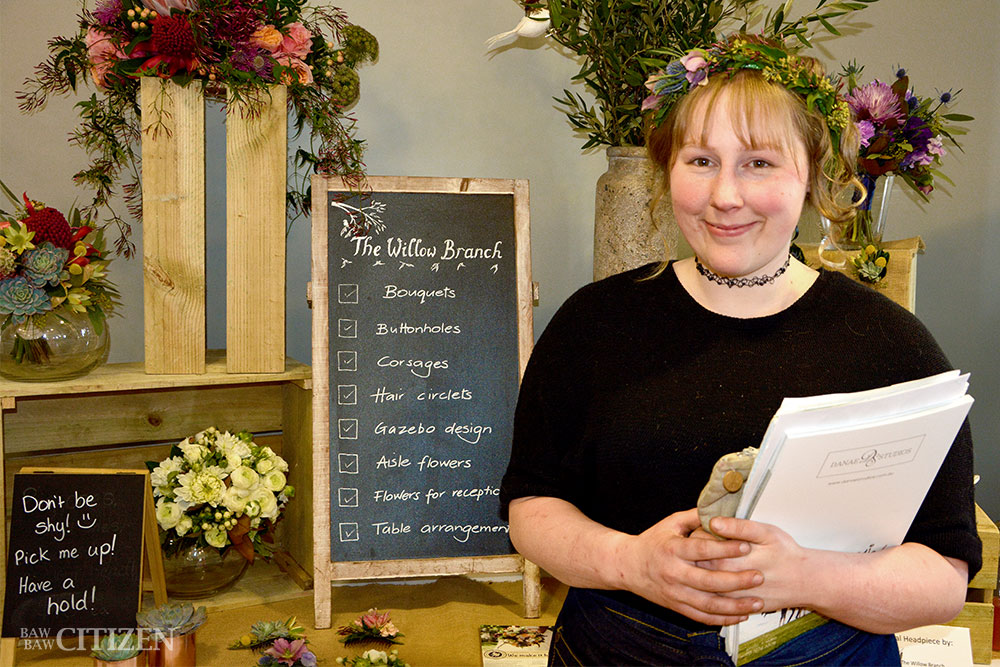 Seasons dictate what Catherine Machell from Drouin’s The Willow Branch has to offer as much as trends do.

Flowers are not immune to the rustic look, combining native and foreign varieties with “lots of succulents” and creative design. 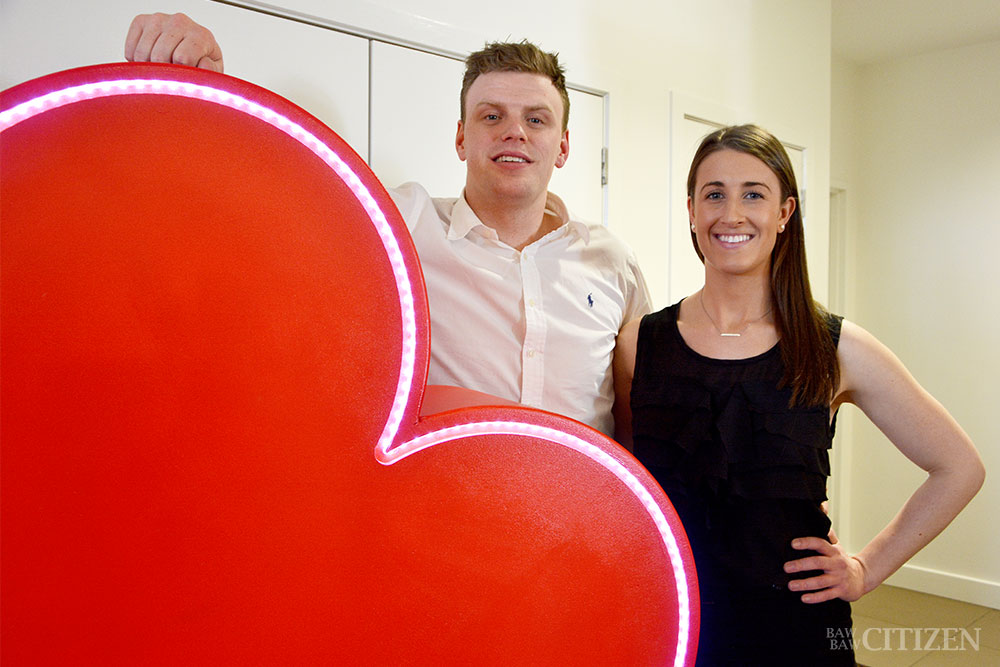 Hey couples, want your names spelt out in lights?

Mikaela Dickson and Jake Eccleston of new Garfield business The Big Font Industry are riding the wave of a still rather new trend: giant, light-up words and symbols for events.

It’s a very modern look, but is apparently proving popular.

This was one of the most unexpected take-aways from the event: there is a strong market in wedding dentistry.

Talking to a representative from Warragul Dental Care, the Baw Baw Citizen was surprised to hear teeth straightening and whitening are popular among mothers of the bridal couple. 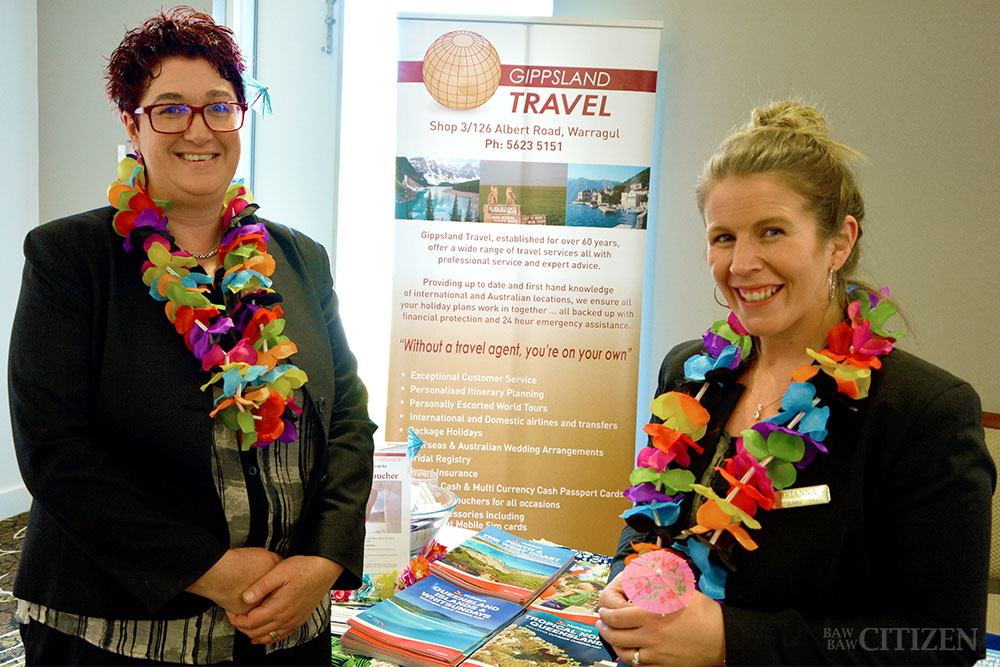 A side-effect of people marrying later in life is kids are now a part of more honeymoons than ever.

“Queensland and cruising are massive for family honeymoons.”

“We’ve also had a lot of vow renewals in the last couple of years. Couples coming in, even just husbands coming in, wanting a family holiday but to renew the vows at the same time.

“No idea [why], it’s probably a new age thing where they’re just trying to stoke up the romance again, with the family involved this time.”

When it comes to honeymoon destinations overall, it’s “not just your stock standard Fiji, Tahiti, those kinds of places anymore” according to Jacinta Anderson (left).

“It’s more of a really big mix” including European and African destinations.

Dress-ups, and why is boho so popular anyway? 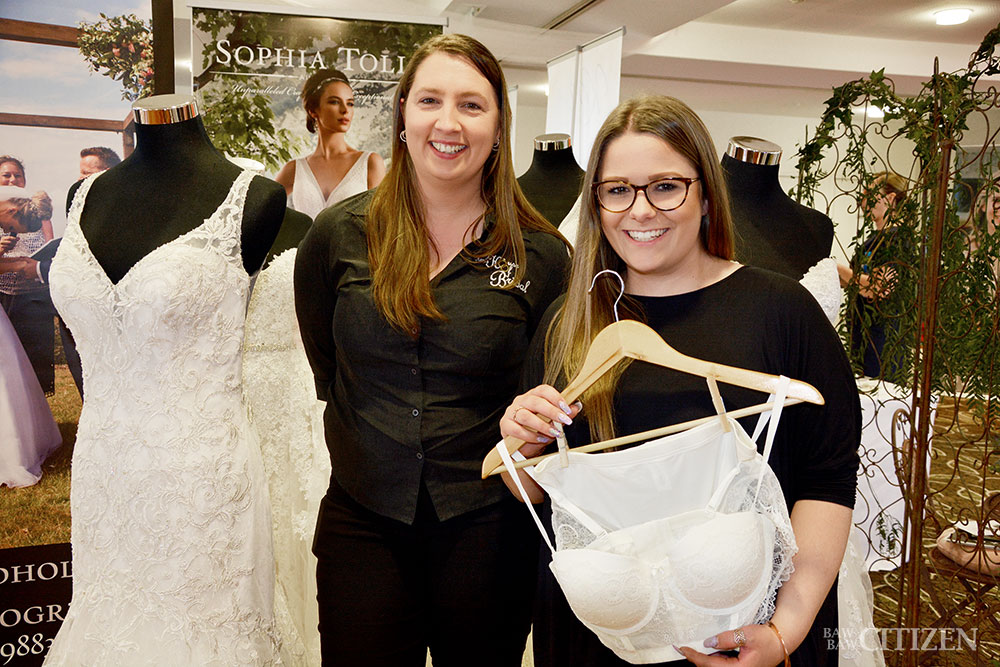 When it comes to wedding gowns, Kerri (left) from Kerri’s House of Bridal in Warragul says “fit and flair, and boho gowns” are in.

At this point we were half way though the stalls and had heard “boho” mentioned more than any other word, so we asked: why is boho so popular?

“I’d say media pushes it that way, so that’s what’s out in the world of media and girls are just tapping into it,” Kerri said.

Personal stylist Rachael Krause (right) said her field of lingerie also had some influence from boho, but there are other trends at the moment too.

“We have a collection coming out with a lot more lace and a lot more embellishments like the boho, but also we’ve gone into a lot of peek-a-boo style with additional straps and things like that too,” Rachael told the Baw Baw Citizen.

“That’s all from social media and the cat walk, and the colours change depending on the fashion at the time.

“We’re seeing a lot of bright colours, but also a lot of silvers, light blues, and pastels, with a lot of velvet and laces as well.” 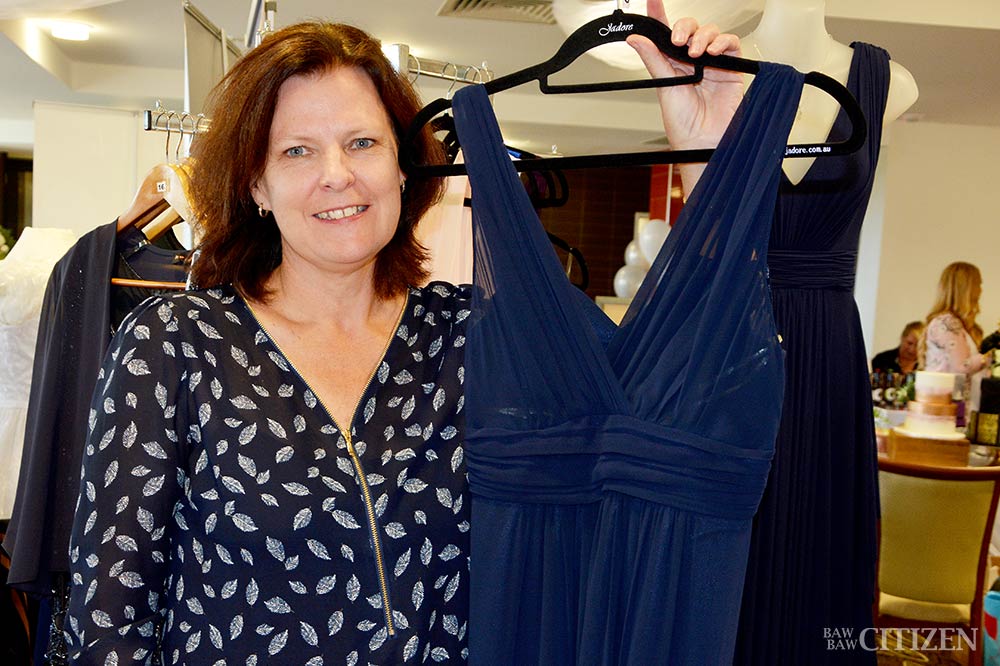 Speaking of colour, Jo (above) from Warragul and Latrobe Valley store Try Angles often dresses mothers of the bride and bridesmaids and says navy is in.

“Navy’s pretty popular with the blush tones, and anything vintage-ey,” Jo said. 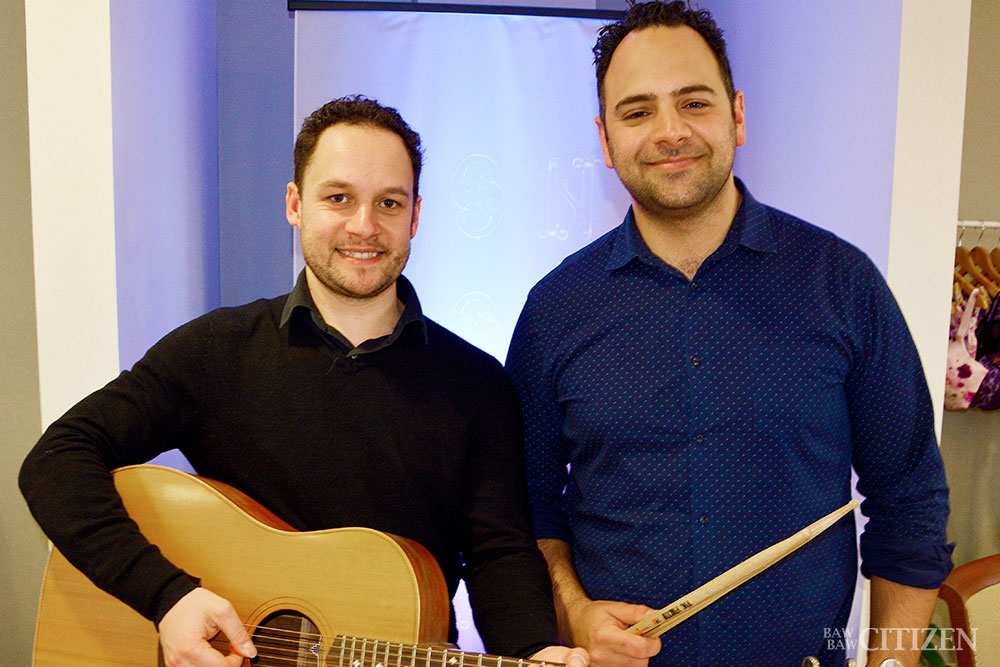 How do you design a wedding set list? You don’t according to Adrian (right) from wedding band Connotations.

“The thing with the live band is we change our set list on the spot,” he said.

“We don’t write a set list for the gig, we’ll basically just read how the crowd are reacting at the time and change tack straight away.

“It depends on the age of the person. We play modern stuff like Pharrell and Beyonce or whatever, but then we also play rock and roll, 90s R&B, funk, and soul.” 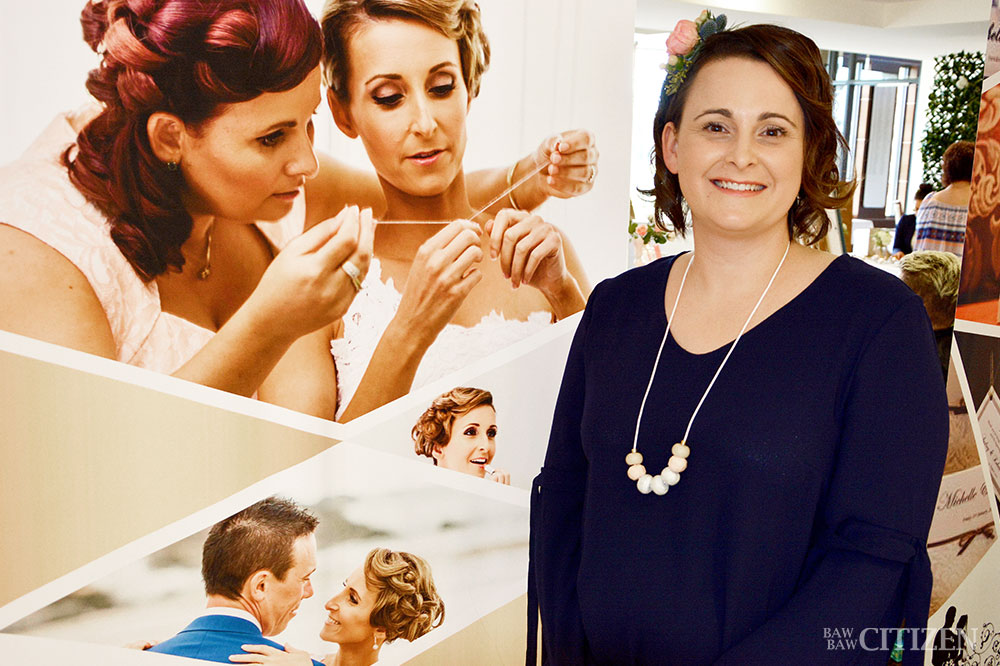 Hair stylist Kristy Morris told us wedding hairstyles change as often as day-to-day styles do, but you guessed it: “boho is majorly popular at the moment.”

“It’s a lot more fun to do and you can do so much more, especially with flowers.

“It obviously still takes a lot of work to make messy look pretty.”

Look at this photograph

Wedding photography is far more advanced than it was even just a decade or two ago, and Simon from Bride2Bephotography’s work stood out at the event.

“I’ve always been about lighting, so a lot of images of mine are using artificial lighting, which is probably why it looks a little different to normal,” he said.

“A lot more natural stuff is becoming more popular now, so you’ve just got to mix it up. You need a variety.” 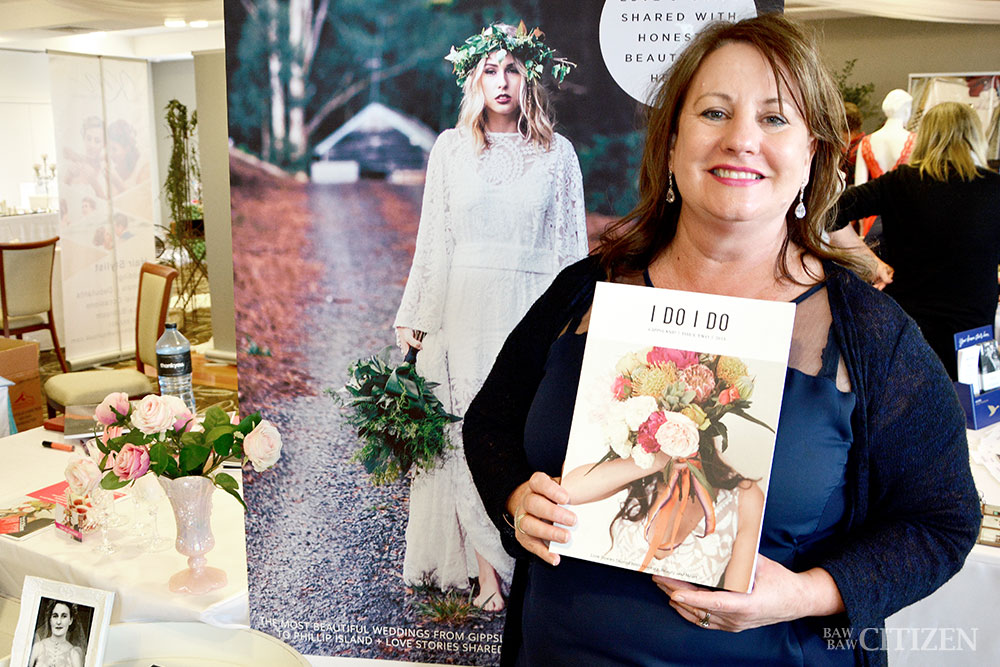 Maybe another piece in the boho popularity puzzle is cost and originality. While talking to owner/editor of new mag I Do I Do Gippsland Robyn Bull, some interesting points were made: modern weddings are cheaper than weddings of the past, and catering and location are big parts of that.

“Many many years ago it was more formal sit-down, whereas a lot of brides and grooms are now looking at a lot of diversity with catering,” Robyn said.

“It might be more formal catering, or I heard one of the vendors here [mention] pot and parmas, so it’s creativity within catering and budgets.

“Weddings are cheaper but classy. Some of it is do-it-yourself, and it’s not so formal and structured.

“I’d say what is different is people’s creativity.

“The other biggest trend is food vans, and the creativity within food vans; from drink vans to groovy caravans which have a name.

“It’s amazing what’s out there.”

But, according to Robyn, we might soon see some of that formality creep back in.

“Rustic’s in now, but I think that will change [with couples] bringing more class into even a rustic wedding or a boho kind of wedding. 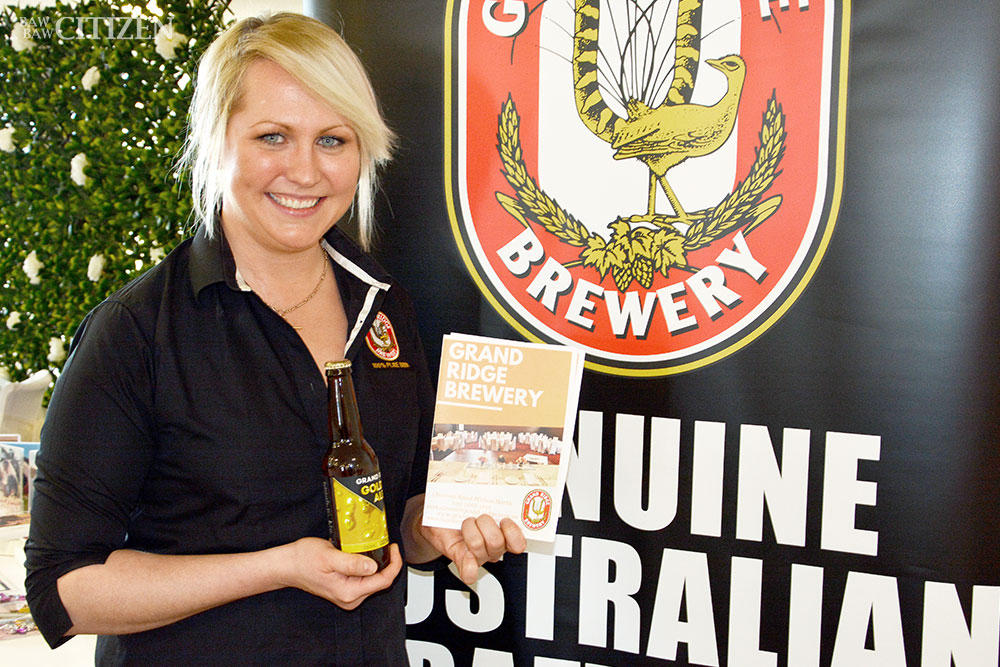 When Robyn mentioned pot and parma, she was referring to Katie Leech of Mirboo North’s Grand Ridge Brewery.

Grand Ridge is one of the catering for non-traditional wedding tastes, and the pot and parma option is a popular one.

“It’s all been a bit more chilled out, a bit more relaxed, a little bit more pub-style,” Katie said. 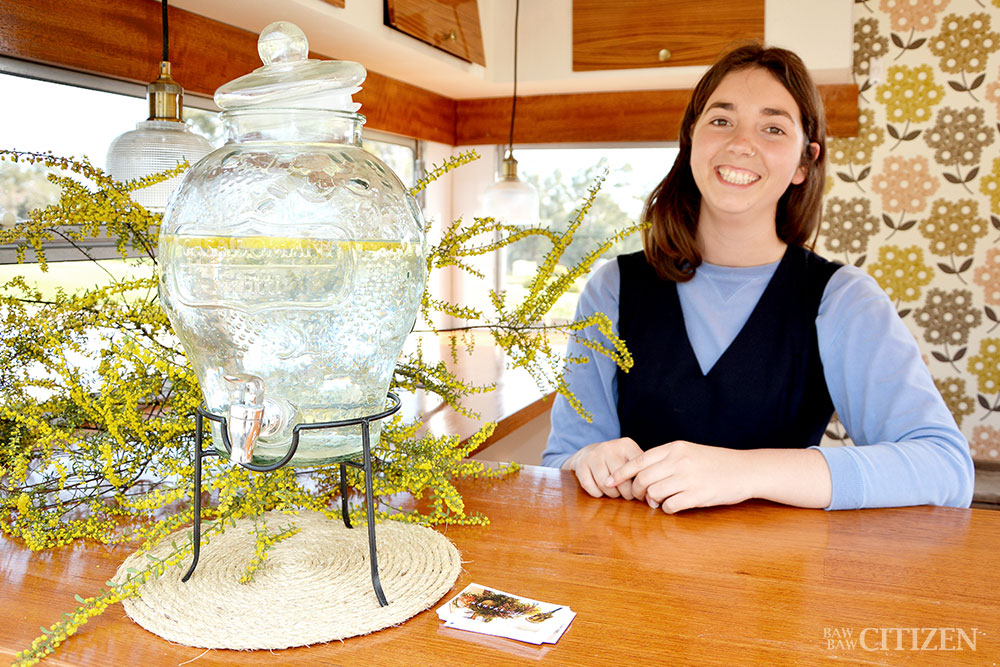 A tent city might not sound romantic, but what about something smaller?

“Glamping tents are quite popular,” according to Kånvas Village’s Meg (above). The effect is a feeling something like a festival, but also very personal.

“It’s coming back to more of a community feel for a wedding, rather than the strict ‘we’re eating at this time and we’re going to sit down at long tables inside.’

“The more external, making-the-most-of-the-good-weather kind of feel is what we’re aiming for.”