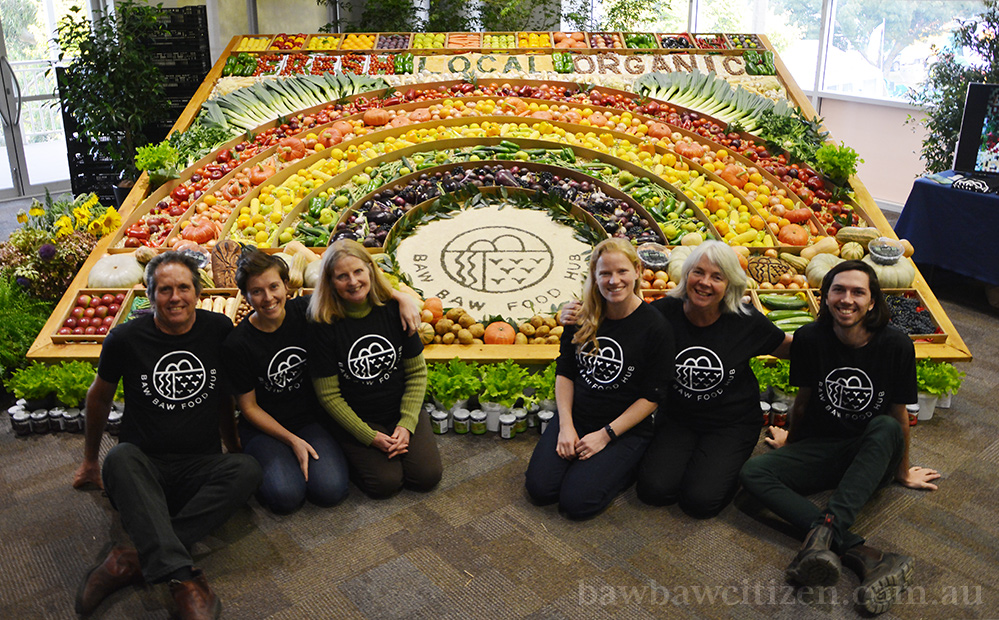 After the opening of its cool room late last year, the Baw Baw Food Hub has continued its amazing growth.

The hub works with farmers to produce weekly and fortnightly fresh food boxes for its members.

What lies in the future for the hub? The Baw Baw Citizen caught up with Lynda Hoare to find out.

Baw Baw Citizen: How many people do you have coming to the hub at the moment for food and sub boxes?

Lynda Hoare: We have about 150 people who come every week who are signed up subscribers, and then there’s probably about another 20 boxes each week for people who just order a casual box.

BBC: And you serve all those people just with volunteers?

Lynda: We’ve got a small group of paid workers who get paid to do all the ordering and preparation and transport, but we really rely on volunteers to get the bulk of the work of getting vegetables into the boxes, helping with cleaning, helping with events and so on. It’s definitely not-for-profit.

BBC: So how do you work with local farmers?

Lynda: We aggregate from other like-minded farmers, so mostly certified organic growers, but also people who grow organically but don’t have certification, usually because of scale – they’re so small they couldn’t really justify the annual fees and paperwork involved in certification.

BBC: And you cater for different size families?

Lynda: Yes, a small, a standard, and a large ranging from $25 to $50 per week. The small box often has eight or nine different things, the standard box has a little bit more and more volume of each, and then the large box has a lot more variety, so maybe 15 lines and a bigger volume of the lines. 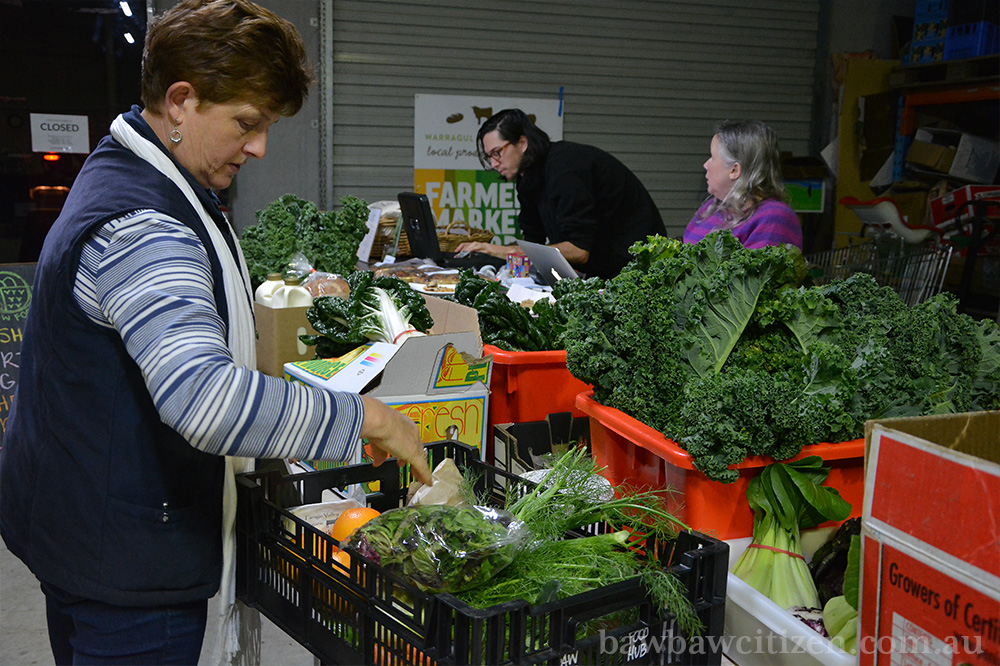 BBC: What sort of stuff ends up in the boxes?

Lynda: All year around we have staples: spuds, carrots, onions, broccoli, virtually 50 weeks of the year. And then the rest of it is seasonal, so through summer people get tomatoes, eggplant, capsicum, zucchini, beans, which then into autumn we’re starting to have things like cauliflower, cabbage, pumpkin, sweet potato, and then in spring it’ll be very lean, what we call the hungry gap when all of the autumn stuff has run out but the summer stuff is still just being planted, so then we rely on things like asparagus and snow peas to provide a bit of interest. It’s very seasonal.

BBC: What has the installation of the fridge, which you threw a big event for last year, allowed you to do? You’ve had it for about six months now?

Lynda: Yeah, getting on six months. That was actually the launch of the hub as well, so that was when we came out into the world and said ‘we’re here!’ So the cool room has been absolutely amazing, helping us to reduce food waste even further so we can really manage our cool chains, so as stuff arrives it either goes straight into the boxes or into the cool room.

In fact, even on the day while we’re packing, stuff is in the cool room until the very last moment when people come pick it up, so everything’s kept in really good condition. It also allows us to work with our growers to provide a cool room space for them, so [dairy outfits] Gippsland Jersey [and] Mountain View Organic, and some of the veggie growers, are using it as their ow cool store space, so they can put a pallet in there and come and go as they need.

BBC: About six months since the launch of the hub, how have things been going? 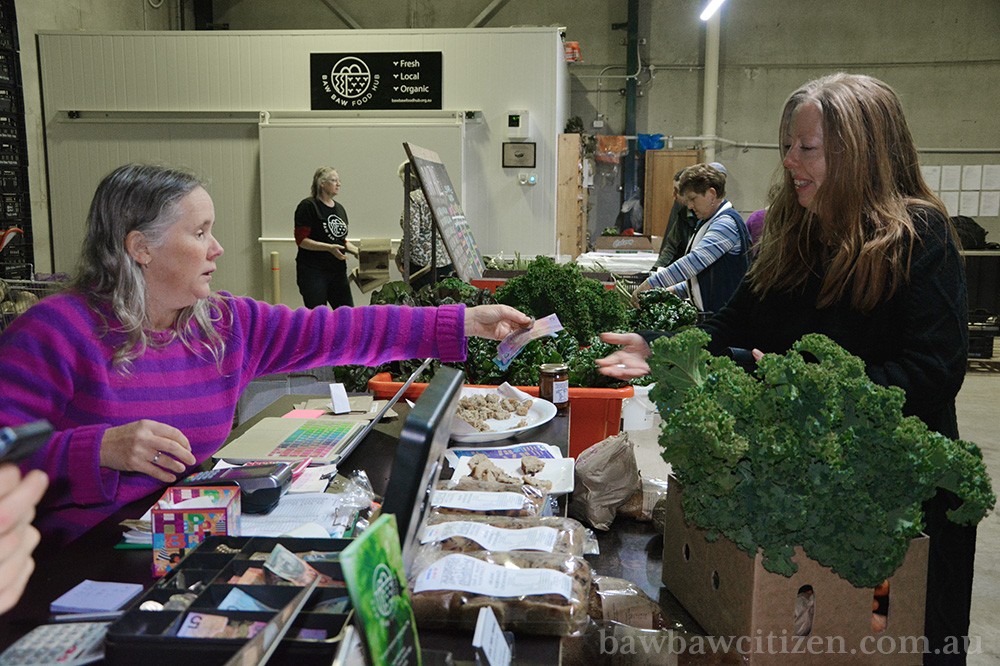 Lynda: It’s going well. We do have… churn, so we have people who think it’s a great idea, are around for a while and disappear, and we just hope that they come back, and often they do. But for some people, being signed up and having to turn up every week is a bit much, so we are now offering fortnightly boxes. That seems to suit some people who don’t eat as many vegetables as what we reckon they should!

BBC: On that note, people who aren’t members of the hub; if they walk in, can they just buy vegetables like they would from a normal greengrocer or supermarket?

Lynda: They can, but we’re only open such limited hours. The short answer is yes they can now because we have the cool room and we can store a bit more. Previously, everything that came in had to go out that day, but now we can carry the risk of carrying stuff that may not sell on one day. We’re also open three times a week now. Tuesday afternoon’s our big opening and there’s a massive array of stuff, Wednesday morning we’re there for a short opening for people who couldn’t come in Tuesday, and we do Saturday morning as well. Saturday morning there’s no boxes, it’s just come in and what you can see is what you can choose from.

BBC: And there is of course your presence at the Warragul Farmers’ Market. Did you start out through the market? You’ve been around how long now?

Lynda: The hub has been going for three years, and previous to that quite a few of the growers were selling at farmers’ markets. I used to do all the big Melbourne markets, I now find that once a month at this market plus selling into the hub can sustain me. That’s the idea; most of the little growers don’t really want to go and spend every Saturday standing in a farmers’ market, so we can do the retail part for them and they can concentrate on growing. For some people, that’s their thing. They’re into growing. They’re not necessarily up for this kind of connection.

BBC: You work kind of like a co-operative then?

Lynda: We do, and we are actually looking at formalising as a co-op, and not as a producer co-op but as a multi-stakeholder co-op of eaters, farmers, and the workers. We’re really excited about that prospect. 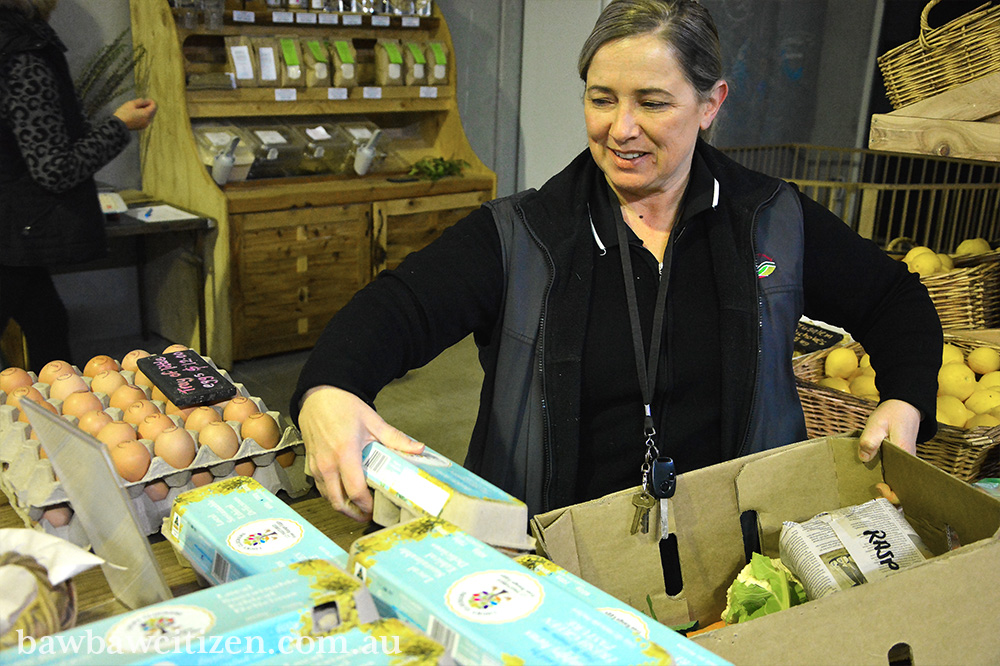 BBC: What do you have to look forward to in terms of ongoing growth?

Lynda: It has been quite steady over the years. We’re growing each season and year on year we grow a bit and the idea is that that growth can fund more employment. As soon as we have a bit more money, we put another person on. There is a massive amount of voluntary labour going into the hub, so we’re trying to get on more sustainable footing by employing people to do some really important roles that take a lot of skill and time.

The other thing we have moved into now is wholesaling, which is very exciting. We’re supplying Hogget Kitchen, Stella’s Pantry, and a new pantry which is about to open in Inverloch called The Local.

Lynda: We were approached by them, and that’s another thing that we’re really keen on is working logistics-wise. They have a vehicle which goes to the wholesale markets and now picks up for us, comes by Warragul on the way back to Inverloch, which is absolutely fantastic for us – we don’t need to be going to the wholesale market to do our top-ups. This sort of logic of collaboration is going right through he local food system, it’s absolutely fantastic. We all work and help each other.

BBC: How many growers do you have cooperating with you at the moment?

Lynda: We have about four medium to larger growers, and from week to week it varies a lot but probably 15 to 18 people contributing into the boxes each week.

BBC: What prompted the creation of this group?

Lynda: It’s all about trying to make small-scale farming economically viable. So taking out the middle people who perform an important role but the cut the take just makes small-scale farming really really vulnerable economically. It’s all about keeping the value either to the farmer, or we’ve added another constraint to ourselves which is we want to make the food affordable so anyone can access it. That’s why we’re a not for profit, because there’s very little margin in the middle.

There’s nothing left by the time we’ve paid. All of those volunteers get a free veggie box, a $35 box, so by the time you have 10 of them in the hub each week that actually adds up to quite a lot, but it’s absolutely fine, it’s great.

BBC: Can anyone just contact the hub to ask about becoming a volunteer?

Lynda: That’s right, drop us an email or Facebook message, anything, we’ll get back to you. We love to see new people.

You can find out more about the hub at bawbawfoodhub.org.au.

Article first published in the 2 June 2017 print edition of the Baw Baw Citizen.

Growing a hub for the whole community
Naked food: how you can reduce household waste to one handful
When Costa came to Baw Baw
Wet winter; good wine