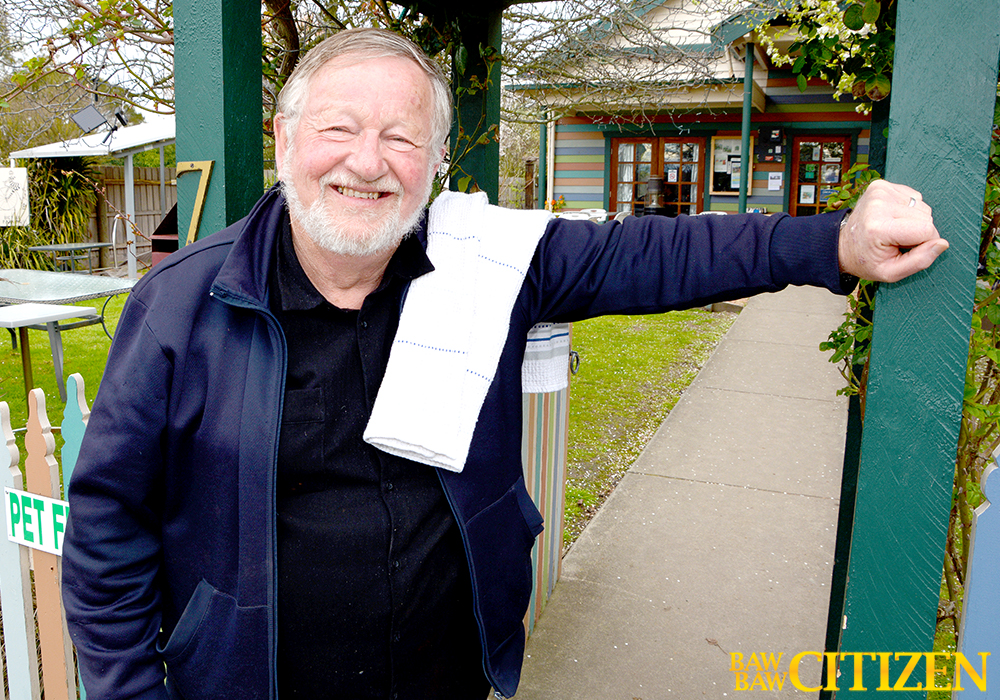 Michael Fozard outside his cafe in Yarragon.

Another Baw Baw local will stand as an independent in November’s state election: Michael Fozard, who will contest an Eastern Region upper house seat.

Many in Yarragon might know Mr Fozard through his cafe Fozigobble. With a menu boasting organic options and the Greens-dominated Baw Baw Sustainability Network based in the cafe’s back yard, it might come as a surprise to some that Mr Fozard was once a very active member of the Liberal party.

We sat down with Mr Fozard to get to know him a little better before the election.

Baw Baw Citizen: I think a lot of people would have had you down as a Green, why are you running as an independent?

Michael Fozard: I’m running as an independent purely due to the fact I’ve been involved in the political system previously, I was a member of the Liberal party back in Blackburn, I was even the president of [that] Liberal party [branch], and then when I came down here I then joined the Liberal party at Trafalgar.

I stood for preselection under the Liberals at the time when Florian Andrighetto (Narracan MP, 1996 – 1999) was selected. Going through that sort of process started to open my eyes a little bit in regards to the structured political parties, and… what [former Liberal premier Jeff Kennett] did to country Victoria really disillusioned me. That was the reason I then decided I would opt out of that particular major party.

I’ve always kept an interest in politics and have been elected twice as a shire councillor, one time to the old Buln Buln Shire Council… and once [to] Baw Baw Shire.

I know a little bit about the Labor party, I’ve had a lot of friends in the Labor party, [as well as] the [former] Greens candidate Malcolm McKelvie. I have a very close association with them.

I feel I have an overall outlook which covers all aspects of what is considered to be part of our political system here in Gippsland. I thought the best way to do this is to stand as an independent and become a voice.

The concern a lot of people have with an independent is you have no power, well you do. My belief is you do have a lot of power, especially in the current political climate that we’ve got here today, an independent can achieve a lot.

BBC: Many are curious what independents actually stand for, given they often don’t have a direct party affiliation. With you it’s extra confusing; you’re formerly a Liberal, then Democrat. You run a place which appeals to hippies and you are campaigning under the slogan “Make Gippsland Great Again,” which seems borrowed from Trump.

MF: (laughs) Well it wasn’t borrowed from Trump, but it just turned out Trump used it and Trump’s renowned for it.

As I’ve said in some of my other press releases, I’ve also used the statement ‘It’s Time’, which is a Labor thing, and I’ve also used ‘Keep the Bastards Honest’ from the Democrats. It’s just getting a message across.

What I’m also now looking at is that I’m trying to ‘Grow Gippsland,’ so I’m using the phrase

BBC: Short of asking who you voted for last election…

BBC: Well then I will ask that. Who did you vote for in the last state election?

MF: I suppose I would have been called a swinging voter.

I voted for Labor once back in the Kennett time when Kennett re-stood, and I’ve voted for the Liberals since then, and also I put in a vote for The Greens as well, mainly because I knew some of the philosophies of The Greens and I agreed with them.

It was probably to a degree not a protest vote, but I felt more comfortable knowing that within myself I’ve done the right thing.

BBC: Speaking of protest votes, some parts of your candidacy announcement media release did seem like you were encouraging people to take a protest vote with you.

BBC: Was that the intended meaning?

MF: Yes. I feel that people get into, and again I’m one of those who could be accused of this, get into a routine of the way we vote.

My parents were Liberal, I basically became a Liberal and I voted in accordance. You could say I followed my parents. And it’s mainly because in the household I lived in with my parents, we spoke about issues of politics and liberalism was always there. My parents came from England and they were Conservatives.

Think about it, break your habit, give some thought, and hopefully you will then decide I’m a candidate you should be voting for in Gippsland.

BBC: What are your key issues coming into this election?

MF: When I first moved to Gippsland back in 1982, I took on a challenge. At that particular time in the Labatouche area they wanted to put a rendering works, and as a community we fought against that. We lost it, we lost it at both council level and at VCAT level. I thought ‘we’ve got to be able to have better planning. We’ve got to be able to have an opportunity for the community to have an input on planning issues.’

The second thing I look at is inflation, the cost of living. Petrol pricing – in country Victoria we rely on petrol. We rely on it for travelling, our trucking industry, our agricultural industry.

Another issue we should be looking at in my opinion is things like education, and I’ve just acknowledged today that Daniel Andrews has given $1 million toward autism and the training of people.

I have a grandson who is autistic and I think that’s great, but then on Tuesday, I do gold panning as a volunteer up at Walhalla, and I [guided] a school in the Warragul area. I said to the teachers there ‘what is the thing you look for in regard to the education department?’ They said money for maintenance, money to improve the school. We don’t get it, everything is deteriorating.

BBC: In terms of cost of living, you mentioned fuel prices particularly. Are you talking subsidised fuel costs for regional areas?

MF: I’m actually trying to work out, in my own mind, how you could do that. I know there are opportunists who would take advantage of anything you came up with. We need to have an inquiry into the fuel industry.

Read all our Narracan 2018 coverage by clicking here.