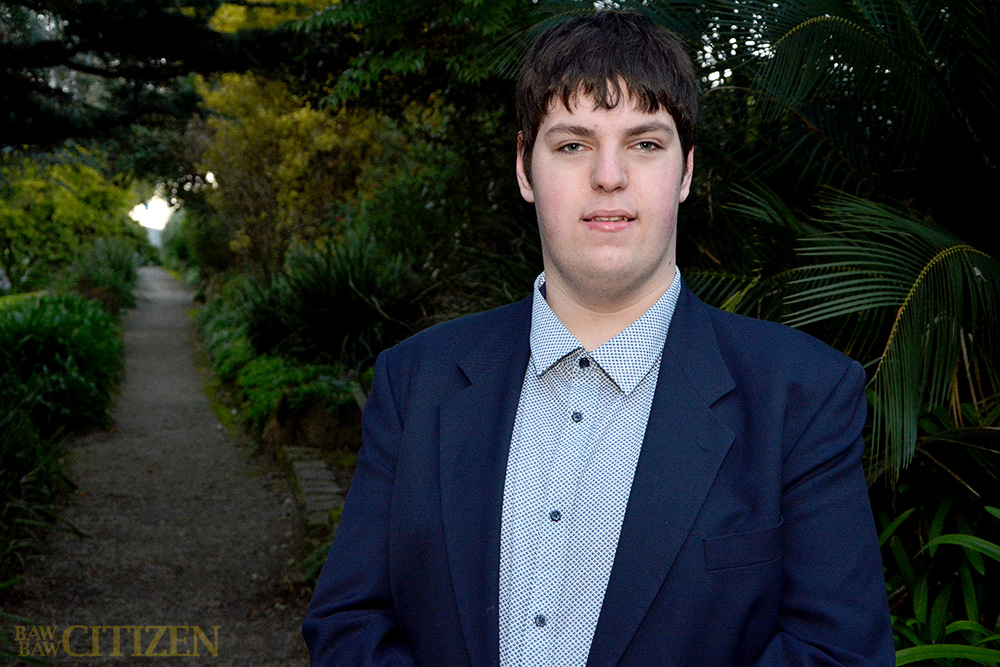 Back in August we met newly pre-selected Greens candidate for the federal seat of Monash William Hornstra.

Since then, the Moe-based recent Trafalgar High School graduate has also been chosen as the party’s candidate for the state seat of Narracan.

We caught up with him to discuss his campaign.

Baw Baw Citizen: Last time we spoke you were the Greens’ newly preselected candidate for the federal seat of Monash, your’re now also the candidate for Narracan. What happened?

William Hornstra: I always had ambitions to run for Narracan, however a good friend of mine, my campaign manager, also wanted to run. I let her run, but she ended up being elected as a councillor in South Gippsland, and when you’re a councillor you can’t run as a state candidate. She asked if I wanted to do it and I said yes. It was a bit of a roundabout thing.

BBC: Do you see many parallels between your federal and state campaigning?

WH: A few. There’s a lot of dissatisfaction with both [parliaments]. There’s also a lot of overlapping, like the issues of education and health. They’re both big issues in the electorate and both of those are managed by federal and state governments. However, state governments I find have more local matters, like the West Gippsland Hospital and the Gippsland train line, while the federal campaign is more about bigger ticket items like services.

BBC: You mentioned a couple of issues just then – what are the big issues in this election for you?

WH: Some of the big issues include forests, particularly in areas of Mirboo North and Noojee; the West Gippsland Hospital is another big issue; public transport; as well as, of course, climate change because, you know, it’s happening and people have seen the drought. We need direction we’re not getting with the major parties.

BBC: How have you found Narracan receiving your campaign so far?
WH: It’s the same as federal. Most people have been pretty positive, that’s good. There are a lot of younger voters who are talking about it, even if they’ve forgotten to enrol to vote. And a lot of people, even if they wouldn’t vote greens, are still, I guess, amazed by how I’m pretty young and yet standing up.

BBC: Earlier you mentioned forests, and by extension logging. With the Greens standing for the end of old growth logging, you’re starkly at odds with the incumbent, Gary Blackwood, who has a history in the timber industry. There are also a fair few jobs in the local timber industry. What kind of policies are you representing when it comes to forests?

WH: When we’re talking about forests, most of the time it’s about logging against the community’s wishes. The community has already said they don’t want logging near their towns because they’re worried about amenity, the loss of tourism, the loss of jobs, that kind of thing. VicForests and both the old parties are trying to ram it through, and the locals want another solution, and the Greens have provided that in the form of a transition plan for the logging industry and establishing more plantations.

BBC: Outside of those communities and green groups, what kind of response has that policy had? Suggesting restrictions to logging can be a bit divisive in the region.

WH: Yeah, it was quite divisive. A lot of people were concerned about jobs, like what would we do to address the job losses faced by those in the native timber industry? Because jobs are such a big issue in the area that was one of the major concerns.

BBC: And what would you do to protect those jobs?

WH: Our transition plan would involve investing in more plantations, which of course would go a long way to replacing some of the jobs lost. And we would also argue that a lot of new jobs will be created in the transition as well, particularly with tourism. The Greens want to establish both the Great Forest National Park in the central highlands, and the Emerald Link in East Gippsland.

We have also found that the native forests will disappear in five years if we do nothing anyway, so people will be without a job without any transition plan.

BBC: How did you reach that five year figure, out of curiosity?

WH: That is in our background paper, I’ll get back to you with a source.

BBC: Moving on to the second thing you mentioned, the West Gippsland Hospital. What is the Greens position on that one?

WH: I personally support a new West Gippsland Hospital. I can understand people’s frustration – they’re very annoyed that because we’re not a marginal seat the old parties have essentially ignored us… well, Labor has essentially ignored us. So our policy would take the politics out of hospital planning. We would establish an independent planning body to dedicate funding to new and upgraded hospitals based on need. And, of course, prevention is better than cure, so we would also provide $400 million to community health, and more investment in public dental and that kind of thing.

BBC: What issues have locals raised with you while campaigning?

WH: I’ve had a few emails from locals. One person was concerned that if we made some areas of the state actual national parks they wouldn’t be able to use them. People are also concerned about planning in Drouin and Warragul, the urban heat effect (temperatures being higher in more built up areas), and a lot of our green spaces being decimated by development. The hospital too is a major one.

BBC: What was your response to the person concerned about, I assume, recreational use of a national park?

WH: To be honest, I’ve asked state office and am waiting on a response. I’m not well versed on the national parks policy.

BBC: We’re close to the Latrobe Valley, and of course the environmental effects and potential closures of coal power stations is a big issue here. The Greens have a transition plan, but what does that actually involve?

WH: We plan to transition to 100 per cent renewable energy by 2030. What that would involve for the Latrobe Valley is the staged closure of the coal-fired power stations. It would also involve expanding the role and size of Solar Victoria, which will be based in Morwell, which will include our plans for solar for everyone. As well as providing a transition to renewable energy, we would provide $300 million investment for battery storage in the Latrobe Valley, as well as $200 million public investment in pumped hydro (a dam being used to store potential hydro energy). We would also support new offshore wind projects [like one] based in South Gippsland.

BBC: Do you expect these projects to pick up most of the jobs that would be lost in the staged closures?

WH: It’s about being proactive, and the staged closures would mean people have time to plan for their next job, education, and stuff. The projects would hopefully go some of the way to alleviating the job losses caused by the closures of the power stations, and our investment in the region would be a driver for economic growth which hopefully would create more jobs.