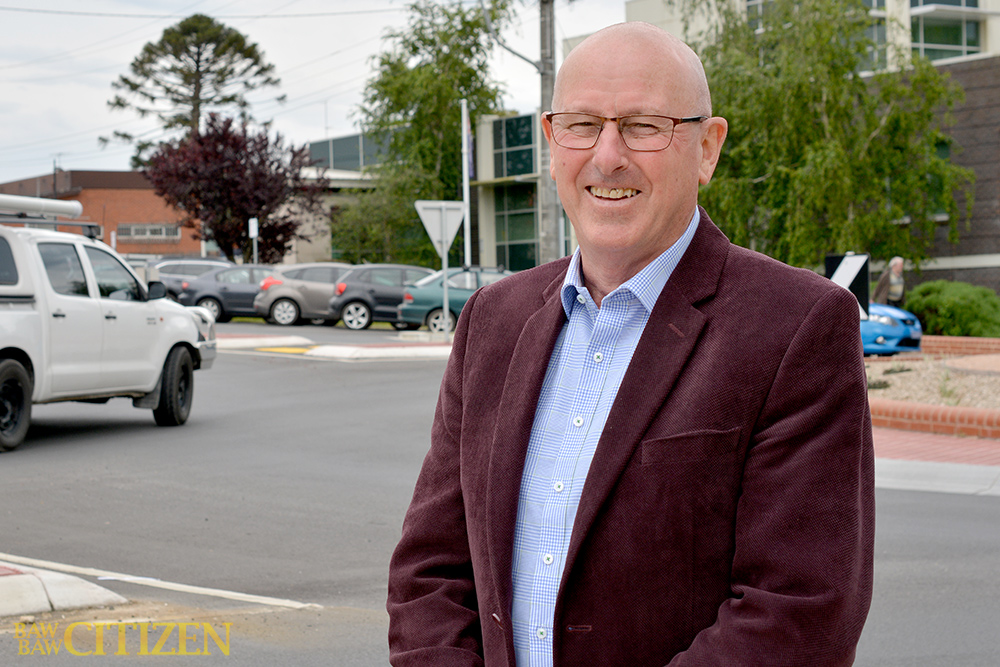 This month’s state election is Gary Blackwood’s to lose in Narracan.

Having won over 55 per cent of first preferences at the last election, the Liberal candidate who won the seat from Labor in 2006 is in a good position to win his fourth term.

Mr Blackwood spoke to us about his campaign on Tuesday.

Baw Baw Citizen: How do you feel heading into the election?

Gary Blackwood: Look, start of 2006 we were 6.8 per cent behind. We didn’t give ourselves a big chance, but we tried as hard as we could. Obviously what we did during that campaign worked very well, so we’ve tried to not forget what worked in 2006 and our campaign today is not much different to then in terms of the way we communicate with the community. But the work really is done during the four years prior to the election. You really are quietly in re-election mode as soon as you are re-elected, so you’ve got to make sure you cover all your bases. We’ve got a map of the electorate here in the office that we put pins in where I’ve been to, so we know we’re giving every small community a fair share of my time and making sure we pick up on all of the electorate, as well as if there are any specific issues in those areas we address those as well.

It’s all about lifting your profile. So probably all the things we did leading up to 2006 we continue to do this election. There’s a new campaigning tool the party’s using called i360, which they’re using in marginal seats, which is really about targeting the swinging voter and dealing with them with the issues that are important to them. I think if that works really well we’re a really good chance. (Indeed – i360 was used by the Liberals in their winning South Australian election campaign earlier this year.)

GB: It hasn’t been used extensively in this seat. We’ve been engaged in the data collection that backs up that program. Anybody who contacts [us] about an issue, whether it be by email or phone or meeting, has information [about them] kept. Then when the election comes around, any policy announcements we make on those issues that are important to them, we contact them.

It’s about engaging with them. If you can identify them as swinging voters in particular, you definitely try to target them with those issues that are of importance to them… by email, text message, or even a phone call.

There are those 20 – 30 per cent of people who are tagged as swinging voters who are probably undecided, those are the ones you try to concentrate on. You target your resources more than spreading it electorate-wide.

BBC: What do you identify as the key issues this election?

GB: The key issue in this electorate, in my view, is certainly the West Gippsland Hospital. It’s interesting Labor are saying we don’t need a new hospital; that flies in the face of the research and studies done by the hospital.

BBC: We spoke with Labor candidate Christine Maxfield last issue, and she said she supported a new hospital but its funding would be considered in the wider context of healthcare in West Gippsland.

GB: Well, what they’re saying is we can rebuild on the current site and people can still drive from Warragul to the Latrobe Valley or Casey to get any services we can’t provide. We won’t accept that.

The current site has 27 acres, the new site has 60 acres. We have a population now of around 50,000, which will grow to 100,000 by 2030, 40, 50, who knows when but certainly quickly. If you really look into the future, as well as current unmet need in the area, you would think it would be logical to build a new hospital on the greenfield site.

If you do it that way you don’t need a disruption that could be over 10 or 12 years on the current site, you’re able to put in at least a flat car park, but more importantly you’re able to actually build a facility that can cater for all the services we will need now and into the future. The greenfield site is the way to go.
[Liberal party leader] Matthew Guy was able to make that decision over two years ago, and so did the shadow minister for health, because they could see the projected growth for the area and the pressure the hospital’s currently under. When we were in government in 2010 we doubled the size of the emergency department, and it probably wasn’t big enough the day it was opened.

BBC: On that front, you have had a period in government in recent history. Obviously the urgency for a new hospital is greater now, but what action did you take in that four years to get the hospital moved to the chosen new site? That move has been in the hospital’s plans for a long time.

GB: The new site was purchased in 2006. We had conversations with the hospital board between 2010 and 2014 about what their needs were going to be, and you’ll also understand that during that period Plan Melbourne was produced by Matthew Guy and that included a strong reference to the growth in population in the Warragul/Drouin corridor.

We worked very hard to address the immediate needs, which was the emergency department, so that was a pre-election commitment we made which was delivered. But it was toward the end of that period that the hospital then started to focus on [the move]. The focus on building a new hospital didn’t really come on until late in that term.

Then Labor committed more money to the planning work when they came to office, which was great, and that planning work has been done. That included a feasibility study and business case for both sites. That information hasn’t been released publicly, but I know it clearly stacks up in favour of the greenfield site.

BBC: Does the policy announced a couple of years ago actually guarantee a new hospital on the greenfield site under a Guy government?

GB: Absolutely. Matthew’s exact words were we would fund the commencement of construction in the first budget, 2019. His words to me have been ‘Gary, we will open that hospital prior to the 2022 election.’

BBC: The Liberal party policy of super-fast regional trains seems a bit pie in the sky at the moment for this line, which has always had issues being caught up in busy metropolitan tracks.

GB: The regional rail plan Bracks commenced and Brumby signed off in 2009, up until 2009 Gippsland was in that plan to have a genuine track in. But based on the costings, it was going to cost around $1 billion for land acquisition to go in above ground. That was the reason it was dropped off. Every other regional centre got its own line in, but Gippsland was dropped off. Labor’s current plan still doesn’t give us a dedicated plan through that corridor.

BBC: But at the same time, the Liberal party’s plan vaguely states a dedicated line will be put in, but doesn’t actually say how.

GB: That’s right, because we’ve announced $8 million for a business case to be developed about what are the options for going through that corridor.

We will be looking at all of the options available to us. Above ground, tunnel, and it might even be a different route.

Because it is so complex to get through that corridor, we need to spend a decent amount of time to look at all the options.

The contentious piece of track is between Dandenong and Caulfield. The sky rail easement is not wide enough for a third and fourth track, so we’ve got to look at other options, whether it be land acquisition to make that corridor wider, which would be very expensive, or tunnelling, or a different route.

It’s a 10-year plan. The business case work will start immediately when we come to government. Over the next period, probably three to four years, the upgrade of the track between Bairnsdale and Traralgon (from 110km/h to 160km/h) and from Traralgon to Pakenham (from 160km/h to 200km/h), will be undertaken. By the time that work’s completed we will [have] the business case.

BBC: What kind of timeframe are we looking at, in your mind, for additional track to be put in close to the city?

BBC: Labor’s Christine Maxfield suggested in our interview with her last month that to achieve promised travel times of just over an hour from Traralgon, you’ll be skipping stations such as Drouin.

GB: That’s a valid point. If you’re going to address the peak hour time, there’s probably going to be one or two services in the peak hour that will leave Traralgon, stop at Morwell, Moe, Warragul, and then express into the city, and coming home at night. But all the other services will still stop at all stations.

We took the chance to follow up on a few announcements Mr Blackwood has made in recent months.

Mr Blackwood says there has been a “really good” community response to the promised $6 million upgrade to the Drouin Police Station.

We also asked whether there were any more details about the $3 million promised to Neerim District Secondary College for undefined projects. Mr Blackwood stuck with the vague detail given at the time of the announcement, which was it would be targeted at the older part of the school.

Mr Blackwood also confirmed he was comfortable in his position as the Liberals’ candidate for Narracan, having had his preselection challenged mid-term.

Speaking of challenges, we asked if Mr Blackwood thought the Victorian Liberals suffered the same divisions federal MPs have shown in recent months with the toppling of Malcolm Turnbull as leader and prime minister. Unsurprisingly, he said no.