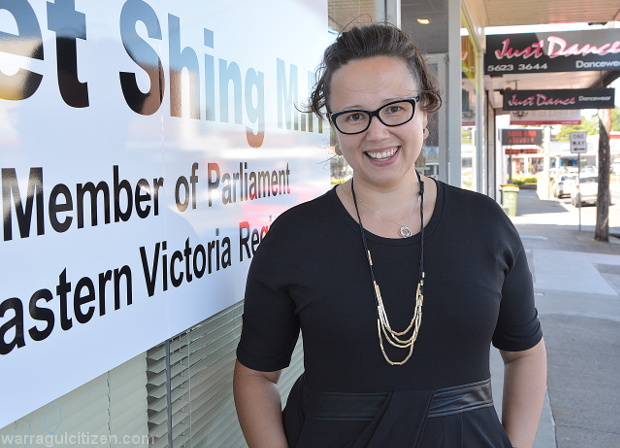 The first out female MP in the Victorian parliament, Harriet Shing, has encouraged same sex marriage advocates to enrol to vote ahead of the postal plebiscite on the issue.

Image: Harriet Shing in Warragul. A version of this story first appeared the 10 August Baw Baw In 90 Seconds – click here to watch now.

Having failed to pass its motion for a compulsory plebiscite on whether Australia should embrace same sex marriages earlier this week, the federal government has decided a non-compulsory postal survey is the answer. You can read more about the plebiscite by clicking here (SBS).

Ms Shing, a Labor MLC for the Eastern Victoria Region, said the Liberal National coalition’s postal poll would be ineffective because federal government MPs would not be bound to vote according to the result.

“I think everybody is increasingly of the view that burning well over $100 million for a non-binding, voluntary postal survey is not the best use of taxpayers’ money,” Ms Shing told the Baw Baw Citizen yesterday.

“In fact all it does is kick the issue along further because there’s no change that will lead from this.

“It’s an issue which is already causing an enormous amount of hurt and distress for people because the rules around respectful engagement have effectively been suspended.

“It means people can say just about anything they would like to say in debating this issue, and that has a very real impact for people who are after equal treatment before the law.

“For some people it’s not just about the rhetoric and the issues around the debate at large, for some people like me, it’s really personal.

“It’s about whether I should have the right to be treated in the same way as someone else who can already access marriage under the marriage act.”

“It’s just a complete political improvisation and it’s completely unacceptable and it should stop,” he told the ABC yesterday.

Ms Shing said she understood there was a wide range of views on the vote, but that everyone who can vote should ensure they are, and that the AEC has their correct details.

“People, particularly from within the LGBTI community, will make their minds up about the extent to which they even respect the ground rules that have been established by the coalition in Canberra, [which is spending] well over $100 million on a stimulus package for Australia Post,” Ms Shing said.

“People don’t have to participate, but in the event that they do [it] in fact won’t count for anything because it’s not [binding] legislation.

“I respect that people will have a range of views about the value of this process, and I also agree that it’s going to be an enormously damaging and hurtful process.

“The key thing we have to make sure of though is people who are not currently enrolled are enrolled by the 24th of August, and that your details are up to date. For anybody who is either uncertain about their enrolment status or who would like to be enrolled, head to the AEC website and make sure that that’s correct.

“From there it’s about making sure we don’t lose sight of what the majority of people in Australia want, which is for LGBTI folk to be able to access the same equality that people take for granted around simply being able to get married and to have their love, to have our relationships, recognised in the same way.

“Marriage is this one area where the Coalition seems hell-bent on doing everything it possibly can to delay, and to do so without any regard for the feelings of the people who it’s actually causing real damage to.”

A version of this story first appeared in yesterday’s Baw Baw In 90 Seconds. Watch the full bulletin below.