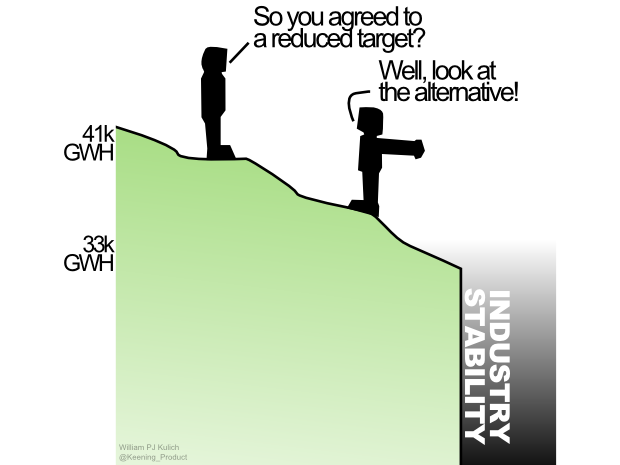 A DECREASED Renewable Energy Target has been approved by the Liberal/National coalition and Labor parties and is set to be passed through federal parliament in coming weeks.

Above: Editor's cartoon and comment
Lobby group the Clean Energy Council successfully played a risky game with the RET. Aware the Liberal government was likely to cut the target altogether, the CEC suggested a lower target and got the parties on board. The move put the solar sector off-side, but seems to have achieved its intended outcome.
- William PJ Kulich

First published in the 29 may 2015 edition of the Warragul & Baw Baw Citizen. Times referenced are from that date.

After approximately 15 months of disagreement between the parties and crossbenchers, the coalition has struck a deal with Labor to a 33,000 gigawatt hour target, compared to the 2009 target of 41,000 gigawatt hours.

The RET is a federal measure to guide Australia toward having 20 per cent of energy generation come from renewable sources by 2020.

Despite the reduction, the bipartisan agreement has boosted confidence for those who provide renewable energy, including solar providers.

While the suspension of the RET had little to no impact on the small-scale solar companies, Mr McCarthy said business had increased to unseen levels.

That was further compounded by the introduction in this year’s federal budget of an immediate deduction of all tax on assets purchased by small businesses up to $20,000.

The policy will apply to all assets purchased by small businesses with an income up to $2 million until 30 June 2017.

The amendments of the RET could also see wood from Victorian native forests burnt as a renewable energy source, despite a number of environmental groups saying it is not an appropriate source of energy.

One company which plans to take advantage of that inclusion, Brown Coal Innovation Australia, has provided approximately $1 million toward a trial of a Direct Injection Carbon Engine in the Latrobe Valley.

The company has said its Direct Injection Carbon Engine, which involves converting the coal or biomass into a water-based slurry, will reduce CO2 emissions from brown coal power stations by 50 per cent by using a mixture of coal and forest materials.

But the inclusion of forest materials has drawn criticism from many Gippsland environmental figures. Some have said the government’s inclusion of burning materials from Victorian forests as a source of renewable energy would be counter-productive.

Gippsland Environment Group member and independent candidate at the 2013 federal election Peter Gardner said the target should be increased to phase out pollution in the Gippsland area.

“I have written on a number of occasions that we should phase out the brown coal generators in the Latrobe Valley as quickly as possible,” Mr Gardner told the Warragul and Baw Baw Citizen.

“Adding the burning of material from native forests to the RET is a further insult to clear thinking.”

Environmental conservation group Gippsland2020 member Tracey Anton has said the inclusion of the burning of forest materials will impact on more sustainable projects in the future.

“To include biomass into the RET now without first defining how the industry will be scoped in the future would be reckless,” Gippsland2020 said in an email to senator for Victoria Ricky Muir.

However, Clean Energy Council chief executive officer Kane Thornton said the RET agreement would allow tens of thousands working in the renewable energy industry to feel secure in their work.

“It has been a tough 15 months, but this development will be a huge weight off the shoulders of the 20,000 people working in the industry,” he said in a media release.

The review of the RET found household electricity bills increase by approximately $1 every week, or by four per cent.