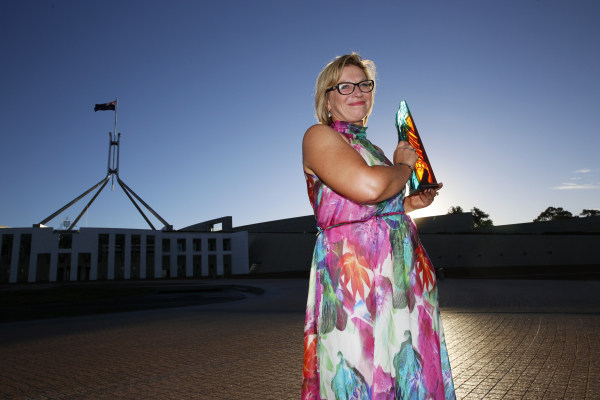 GIPPSLAND // AUSTRALIAN of the Year Rosie Batty visited Warragul last week as part of her national campaign against domestic violence.

Ms Batty spoke at a sold out Baw Baw Business and Community Network event attended by hundreds of locals.

Those in attendance heard Ms Batty’s story of resilience, courage and inspiration. Her relationship with a violent partner who ended up killing their 11-year-old son Luke has been at forefront of public discussion on domestic violence.

“It’s important to highlight the issue and support what has already been done.

“Gippsland is close to where I live and it’s important to support local communities.”

Community perception of domestic violence must be addressed to stop the violence, according to Ms Batty.

“People find it uncomfortable to talk about domestic violence as a gender issue, which is the biggest hurdle,” Ms Batty said.

“The statistics say it all; men are perpetrating the majority of the violence.”

Men supporting community events and standing up against domestic violence is crucial.

“The challenge is to get the message across to male audiences and encourage men to support community events,” Ms Batty said.

“Men need to see the part they can play rather than seeing it as ‘feminist brainwashing propaganda.'”

Despite community discussion and measures implemented to combat widespread domestic violence, a lot of progress still needs to be made.

“There is a lack of resources for women and men, perpetrators and victims, to get the support they require,” Ms Batty said.

“We’re only at the start of things that need to happen.”

Australian police deal with a domestic violence case every two minutes. An estimated 657 cases require police intervention every day nationally, while in Victoria alone police deal with 68,134 family incidents in a year.