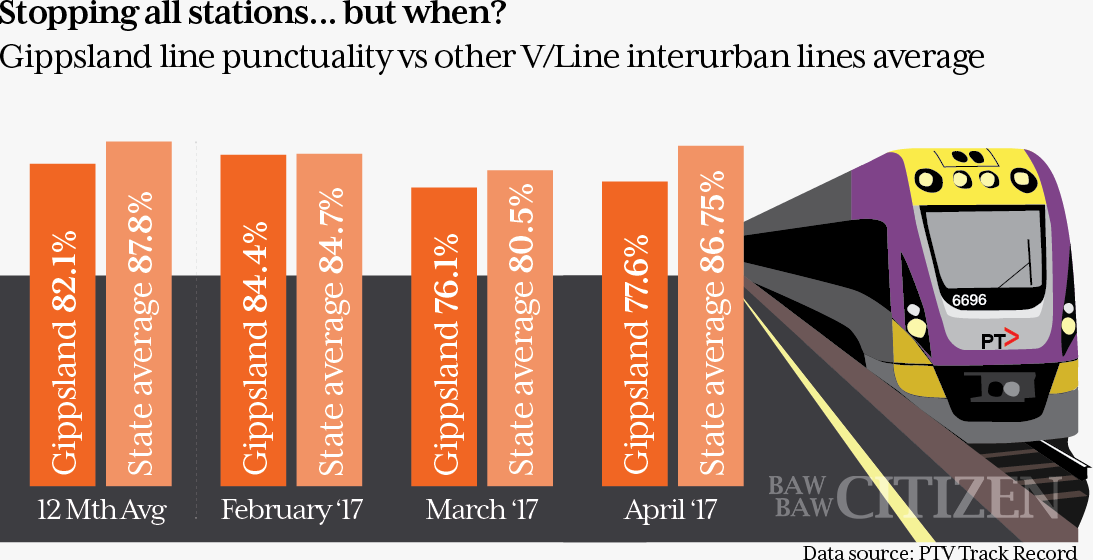 Delays on the Gippsland line are a common complaint among commuters, so recent announcements of upgrades, extra services, and promises or improved reliability have been met with interest and scepticism.

But will the upgrades proposed by the state government actually help improve reliability, and what really are the biggest bottlenecks which make the Traralgon line the least punctual interurban rail route?

Let’s start with reviewing exactly what the state government has proposed doing to improve the line. At the end of April, Victorian premier Daniel Andrews visited Warragul Station to announce his government’s statewide $1.46 billion Regional Rail Revival package. The lion’s share of the funding, $435 million, has been earmarked for works on the Gippsland corridor.

Assuming the state gets federal government support (more on that in a moment), that cash will fund upgrades to train detection systems at level crossings, duplication of single track sections between Bunyip and Longwarry and through the Haunted Hills, second platforms built at Bunyip, Longwarry, Morwell, and Traralgon, signalling upgrades, and the duplication of the Avon River Bridge east of Traralgon.

The upgrades are expected to allow Gippsland line services to run every 40 minutes, a relief for commuters catching peak hour trains filled to above seating capacity.

“What’s been promised has been in some cases long-overdue and is certainly needed,” regional spokesperson for the Public Transport Users Association Paul Westcott told the Baw Baw Citizen.

“One of the long-standing problems that are going to be dealt with… is the single track between Bunyip and Longwarry, which has been a bugbear for decades. It was disappointing it wasn’t built in the first place when the Gippsland line was duplicated.

“Any single track section of line is going to be a problem; it’s going to cause delays and exacerbate unreliability because if one train coming one way is late then the other train [travelling in the other direction] has to wait before it can proceed.

“We do of course note the fact that a number of the projects listed in the budget promises do depend on federal government funding, which at the moment is the subject of some dispute, so it’s disappointing that that’s the case.”

And there lies the problem these upgrades face. The Regional Rail Revival project relies on funding from the federal government as part of its privatisation-encouraging Asset Recycling Initiative. The long-term lease of the Port of Melbourne was expected to bring in more cash than the feds are willing to hand over to Victoria.

“The money is Victoria’s under a written asset recycling agreement between the commonwealth and the states that was signed in 2014,” Gippsland Labor MP Harriet Shing said on social media after the announcement.

“Under that agreement, an amount of 15 per cent of the proceeds of an asset that is privatised (in this case the lease of the Port of Melbourne) is payable to the state to use for infrastructure projects.

“Unless the federal government is planning to treat Victoria differently to other states and to breach its own agreement, this money is very much Victoria’s and the infrastructure projects we have determined will be delivered from this money are the regional rail upgrades that we announced today.”

Ms Shing’s comments came after criticism from the Liberal/National opposition for relying on the federal funding. Narracan Liberal MP Gary Blackwood said “commuters will rightly be sceptical of this announcement.”

Public Transport Minister Jacinta Allan told the Baw Baw Citizen “the Turnbull government is trying to walk away from the Asset Recycling Agreement – shortchanging Victorians to the tune of $1.46 billion.”

“We will continue to lobby the Federal Government to make sure Victorians get the best deal possible and our fair share.”

One part of the project did receive federal government support in this year’s budget. Mr Blackwood announced a $500 million commitment to [correction: upgrades including] duplicating the line between Bunyip and Longwarry, a project he campaigned on during the 2014 state election.

Asked how useful duplicating only one section of track would be, Mr Westcott said “the longer the single track section, the worse the problem.”

“The Bunyip-Longwarry one is an obvious bottleneck, and the closer you get to the city the worse the problems of single track sections are.

“Obviously… we’d advocate for continued duplication, even if it’s done in stages. It doesn’t need to be done all at once.”

Mr Westcott said even smaller duplication projects could be effective in the short term, “so long as you can create long enough sections of double track in places, what’s called passing lanes instead of passing loops.”

“Passing loops are long enough just for the train to pull in and wait for the train going the other way, whereas a passing lane might be a number of kilometres long, which means both trains can pass each other on the run. Then you could link the duplicated sections up gradually as you go.”

The fact even smaller projects, if half a billion dollars can be called small, could make for big improvements is heartening for commuters on the state’s least reliable interurban line.

April’s performance numbers, the most recent available, put the Traralgon line’s reliability at a state high of 99 per cent, but punctuality at just 77 per cent. The next least punctual interurban service was Ballarat at 81.5 per cent, while Seymour won the most punctual ribbon at 90 per cent. Geelong and Bendigo both achieved punctuality rates above 87 per cent.

“For the interurban services yes, I think definitely the Traralgon line takes the ribbon for the least reliable services in general if you take it over time,” Mr Westcott said.

“The reason for that is not hard to see – it’s partly the single track sections, and also because it has the longest section of track shared with Metro services of any of the so-called commuter lines.”

Ah, Metro. Even occasional travellers to and from Melbourne are familiar with the urban crawl, where a V/Line train winds up stuck behind a slower metropolitan service. Other regional lines received dedicated tracks to bypass suburban stations as part of last decade’s Regional Fast Rail project. Gippsland still shares tracks with several lines, including Dandenong, Cranbourne, and Pakenham.

As part of the Level Crossing Removal Project, elevated rail (nicknamed “Skyrail”) is under construction between Caulfield and Dandenong. As with all level crossing removals, the project will likely improve reliability on the line as less can go wrong at intersections. The problem for Gippsland is the project will not add any tracks for the three metropolitan lines or our own. There will be no third or fourth track added to ease congestion. 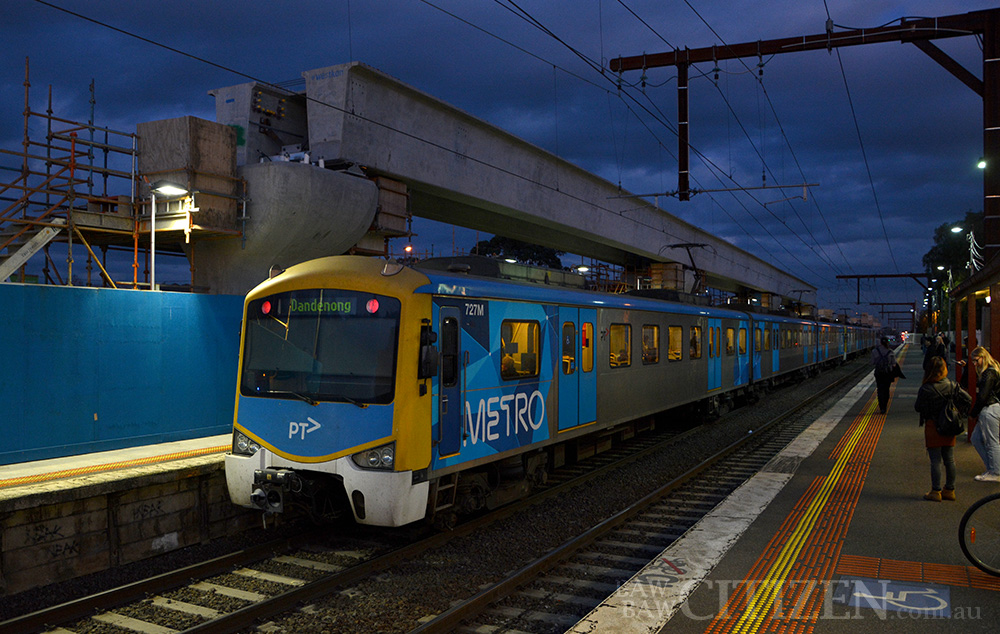 Asked if the state government had considered leaving the old ground-level tracks down exclusively for regional rail use, which would substantially reduce the number of trains at level crossings, Ms Allan only commented on the “11 MCGs worth of new open space” the removal of the old tracks will create.

Mr Westcott said the decision to not create additional elevated tracks might have to be revisited if the next major Melbourne port is built in Hastings.

In the meantime however, Skyrail is expected to increase capacity of the corridor by 42 per cent, and the government has cited an Infrastructure Victoria strategy which states additional tracks will not be needed on the corridor for perhaps over 30 years.

Skyrail isn’t the only suburban project Gippsland line travellers could benefit from. Moving block signalling, where signals are effectively moved into trains to allow them to run closer together, will be trialled on the South Morang line from 2018 in preparation for the Metro Tunnel project under the CBD.

“It should also increase reliability, depending on the circumstances. It will mean they can run closer together – they won’t have to wait for the train in front to clear a signal block (that’s the area between two signals) before they can proceed, as long as they keep a common distance between them.

“They come a bit more like cars than the trains we’re traditionally used to.”

Moving block signalling, or “high capacity signalling” as the state government refers to it, will be gradually rolled out between Dandenong and Watergardens as part of the Metro Tunnel project by… yikes! 2026! The adoption of moving block will, however, likely be a first for Australia.

First published in the 2 June 2017 print edition of the Baw Baw Citizen. The online edition has a corrected graph – the print edition had correct values but column heights did not vary.