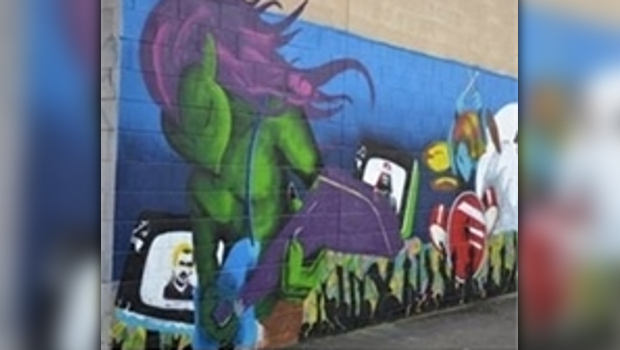 EAST GIPPSLAND Shire Council has commissioned a number of students to produce works of art in a graffiti hotspot in an attempt to reduce vandalism.

The murals, one seen above, were created as part of the Lanewayz Artz Blitz program managed by the shire with funding from a Department of Justice Graffiti Prevention and Removal Grant.

Five murals were created though the program, which was delivered as part of the Personal Development Skills VCAL program.

The project aimed to give some specific creative training and development opportunities for the students while providing some positive role modelling in an effort to reduce illegal graffiti.

East Gippsland Mayor Mark Reeves said the project and the murals were something locals could be proud of.

“This project will see the delivery of some beautiful murals of which the participants in the project and the broader community can be proud,” Cr Reeves said.

“It is also hoped that the strong level of ownership and participation by young people in the project will have a significant impact in reducing the incidence of illegal graffiti throughout our shire.”