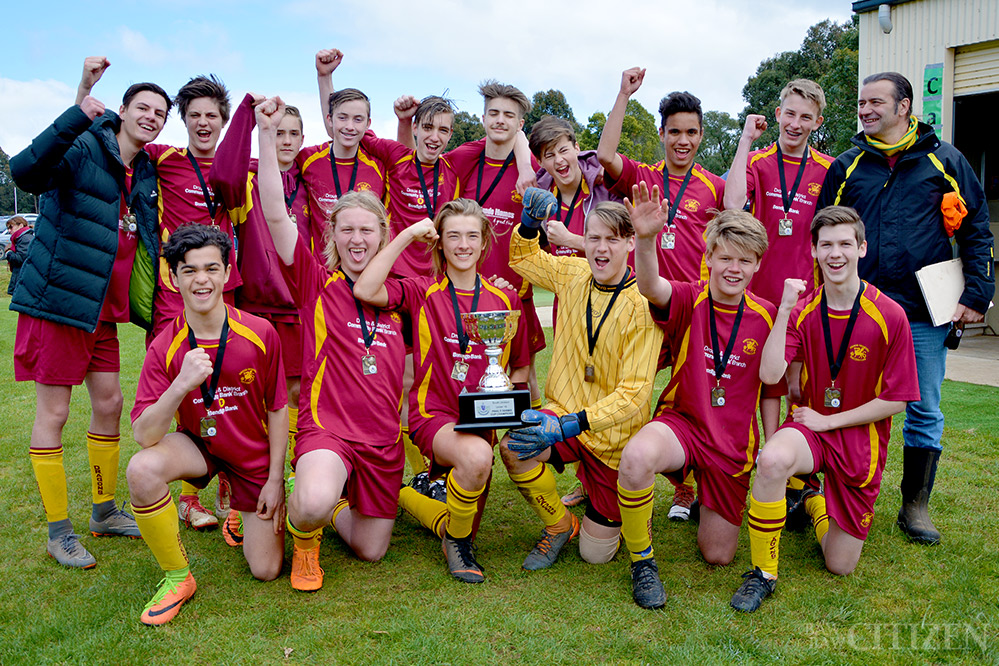 First published in our 27 September 2018 print edition. Get your free copy today!

The result was a typically strong one for the side, which finished the season at the top of the ladder.

“I’m proud of the boys (while playing in the mixed category, the team is entirely male) – we all played good.

“Most of the time I give them a hard time about how they play and everything, but I’m proud they all coped with me.

While Drouin came away with the most points, Phillip Island kicked the most goals; the first three goals for the Dragons were scored by Breakers players.

“They were own goals because they were under so much pressure from the boys and the way we were bringing the ball into the box, the only way they could defend was to go the wrong way,” Drouin coach Jon Ercoles told the Baw Baw Citizen.

“They were basically facing their own goals to defend a ball, and that was part of the plan: to push them into their own box and squeeze them in there.

“In the second half we had better control of the game, we started to move the ball around a little bit more freely and had plenty of time. Our nerves had cooled down a bit so that was good.

“Phillip Island came back at us and gave us about 15 minutes of real pressure, which they got a goal through. We limited them to shoot from outside the box .Then they got a penalty… which our goalkeeper saved.

“Towards the last 15 minutes, Josh Cavallin came running down the line, the wind was in his favour, and he went for a shot and put it right in the top corner, which basically sealed the game.

“4-1 is a good win, but the way we played I thought we probably would’ve been a little bit higher than that.

“We were just unlucky with a few shots – the nerves had kicked in with some of our more skilled players, I think they put themselves under a lot of pressure to perform today, and that showed on the ground.

“But I find the kids who were here not under pressure to enjoy the day, they were just on fire, they played exactly the way you’d expect them to play.”

Drouin’s Under 16 Mixed side has performed so well this season the club is creating a whole new team to keep the players together. The Dragons are putting together a new Under 18 Boys team, which will either play in the state league or in Gippsland.

“It’s a good transition, because our coach trained us up to playing how we’re going to play up there, so this year’s more just been a warm-up for what’s to come,” Enrico Ercoles said.

“That will give them a little bit better competition to play against, and they’ll develop a lot better that way,” Jon Ercoles said.

“It’s always good to play under pressure because you can work out how you function in those conditions and adapt to it. That’s what I’m hoping to develop for next year.

“From the body language of the kids and the talk and the way they man up, I feel they’re a pretty close-knit bunch and I am pretty sure most of them will be back in next year.

“We’ll still hold onto this team, we’ll probably pick up a few new players. We have key players at the moment who have a set position on the ground, and we’ve got some players who are still developing their position or their skills so we can work out where they’re going to be best positioned.

“Doing what we’re doing now I’m hoping to develop these kids that one two years more and then we’ll have kids who are well developed physically and mentally to play that level of game.”