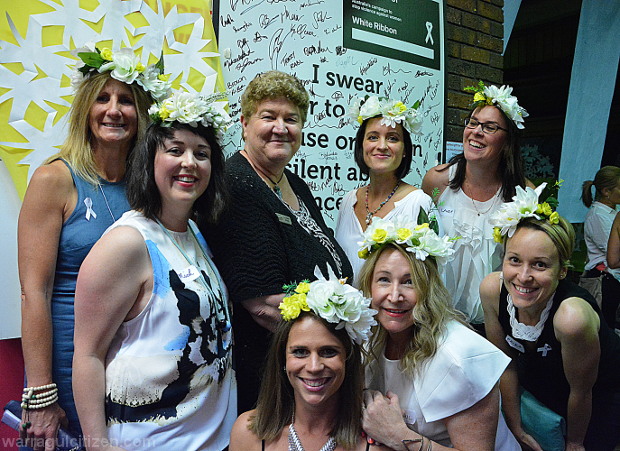 WOMEN in Gippsland, a new networking, support and advocacy group for women formed from the former Gippsland Women in Business group, has launched with up to 300 people attending the inaugural event.

First published in the 12 December 2014 edition of the Warragul & Baw Baw Citizen. Get a copy today from retailers across Baw Baw.

The event at the Warragul Cinema and Cinema Arcade earlier this month told interested women what the group was about and encouraged networking and participation.

Dubbed “White Christmas,” the launch was just the first of many Women in Business events that will champion anti-violence against women charity White Ribbon. In addition to speeches on how the group would work, the night featured a talk by Baw

Baw Shire’s Kerry Irwin on the statistics behind domestic violence.

Committee member Kelly Koochew told the Warragul & Baw Baw Citizen the direction of the group in 2015 would be determined by its members.

“I’d like to think that that will come from the broader community as much as it will from the committee itself, so I think that’s not predetermined,” she said.

“We’ve got our own ideas for events and our own ideas for things we would like to see happen, but we want it to be really consultative, really collaborative, because there are so many clever, creative, inspired women and so we want next year to be shaped by them as much as us.

“I think where it was a business group it is now a women’s group.

“We want mums, retirees, we want to involve teenage daughters, stay-at-home Mums, people who are entrepreneurial and people who are working behind a desk and not really interested in that part of it.

Ms Koochew said she hoped the group would become a hotbed of ideas, new projects and advocacy.

“I think the focus of the group is about connecting women, empowering women, nourishing women, creating a structure for people to bring their ideas to life,” she said.

“People might have ideas, or might want to do things and don’t know where to go, and I think we can put some structure around it and help make it happen.

“I think it’s going to be an awareness-raising group. The White Ribbon campaign will be for the whole of 2015, and then a different cause will be chosen for subsequent years.”

Ms Koochew said she was surprised by the number of people who came to the inaugural event.

“We were thinking 50 was ambitious and that’s what we worked a budget to.”

“It’s good to see that out community has such a strong strength of young women in business in our shire,” she later told the Warragul & Baw Baw Citizen.

“It’s fantastic to see. They’re all talking, which means they’re networking, and that means mentoring each other to even better things. Fantastic!

During her speech, Cr Brown said “inequality and sexism [leads to] violence against women, but awareness, information and action will help.”

“People can speak out if they hear about violence or sexism. Together we can end violence against women.”