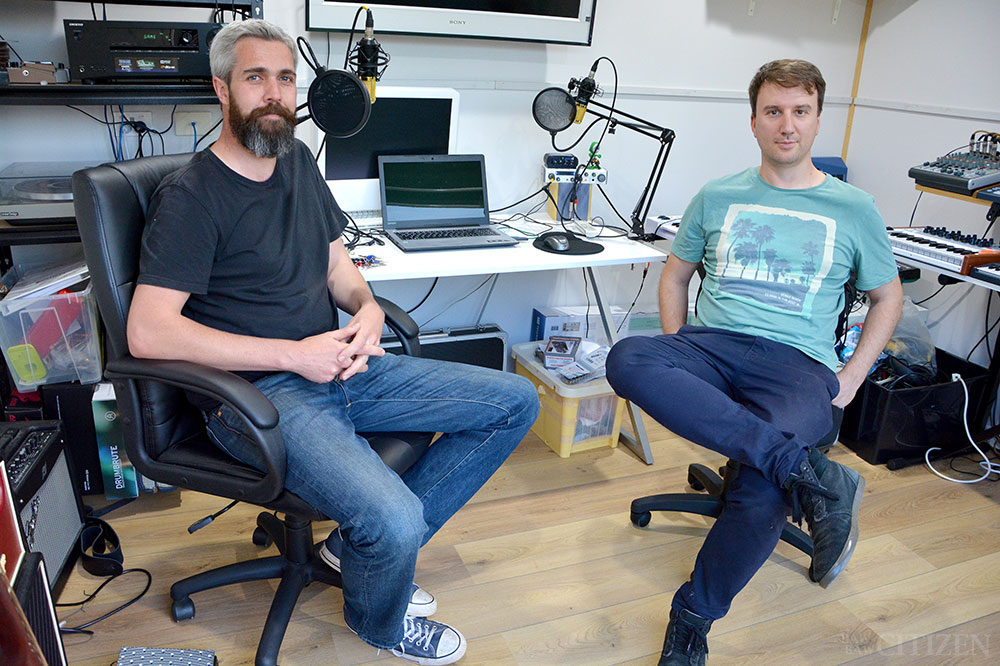 When you think of Gippsland’s future, what issues do you see? How can we tackle and make the best of them? Baw Baw’s James Allen and Angelo Saridis are searching for answers.

This article was first published in the 17 May 2018 edition of the Baw Baw Citizen.

They’re doing so through their new podcast The Gloaming, a term which describes the time just before the sun sets when you can’t quite be certain of anything you see. With issues of food security, climate, energy, and more all facing Gippsland, the pair see the region as being in its own period of gloaming.

The Baw Baw Citizen caught up with Angelo and James to discuss what they have found with four episodes under their belts.

What prompted you to start producing the show?

Angelo: We’d see each other every day at work, and there’d be conversations all the time about issues, as well as about podcasts. At one point we just said ‘hey, why don’t we just do it?’

James: We were both immersed in thinking about local issues, and trying to understand where is Gippsland at with its development. One of the main motivators was to try to create a regional narrative.

How do you figure out what Gippsland’s narrative is?

James: We’ve come at it from a particular angle; we have a future which is potentially affected by a bunch of different kinds of crises.They all present certain challenges for any region of the world, but let’s have a look at Gippsland and see how it might affect us and what people might be doing in response.
The one thing we didn’t want to do was completely sideline the negatives. If there are issues there we need to talk about them, but then talk about what the manageable ways people are dealing with those issues are.

That’s kind of the flavour of the podcast; it’s set against the backdrop of [the fact] there are going to be some quite significant challenges for us in Gippsland, but we’re having a look just locally at what can be done or already is being done, that’s where the positivity is and that’s where the hope lies.

Your first episodes focus on agriculture – is that your main focus?

James: Even though we’ve probably ended up talking a lot about food or agricultural themes here in Gippsland, we’ve also tapped into other themes [we want] to talk more about. We look for those triggers.

Angelo: In the first show we lay out a few of the themes we want to tackle. It’s broad, but it’s all captured under the banner of resilience.
If you’ve got the potential for crises in the future, be they economic or ecological or the advent of automation which might take jobs, what are the components of a community that have to be [ready]?

If you build resilience into your community, then should that shock manifest you’re going to be able to cop a bit of that hit and bounce back, or transform into whatever you need to be.

If you look at it through that lens, it means we’re touching all aspects of society. Anything we depend on for the good life is the stuff we have to think about.

Do you feel Gippsland is on the same page with how to deal with big issues, or are there just lots of little groups?

James: I’m not sure it’s important we’re on the same page about everything. I think that if you’re looking at a future where — and this is the idea of the gloaming, it’s kind of the twilight — you’re not able to see everything in your future, you can’t plan exactly for that. Ideally, you want to have as diverse a range of options in your future as possible.

Angelo: One thing that’s really common about the people we have spoken to here in Gippsland is they do see there’s much promise. There are so many opportunities here for this community to be resilient and to bounce back.

James: I think that’s the beauty too in looking at the local perspective. When you think about climate change, or any huge issue, as the average punter… it is despair-inducing. It’s almost overwhelming.

But when you bring it to the local level, all of a sudden there’s stuff you can do. Just think and act local, because that [issue] on the human scale is manageable; here are my two hands and I can make a difference here!

You can listen to The Gloaming using your favourite podcast app, or by visiting thegloaming.com.au.