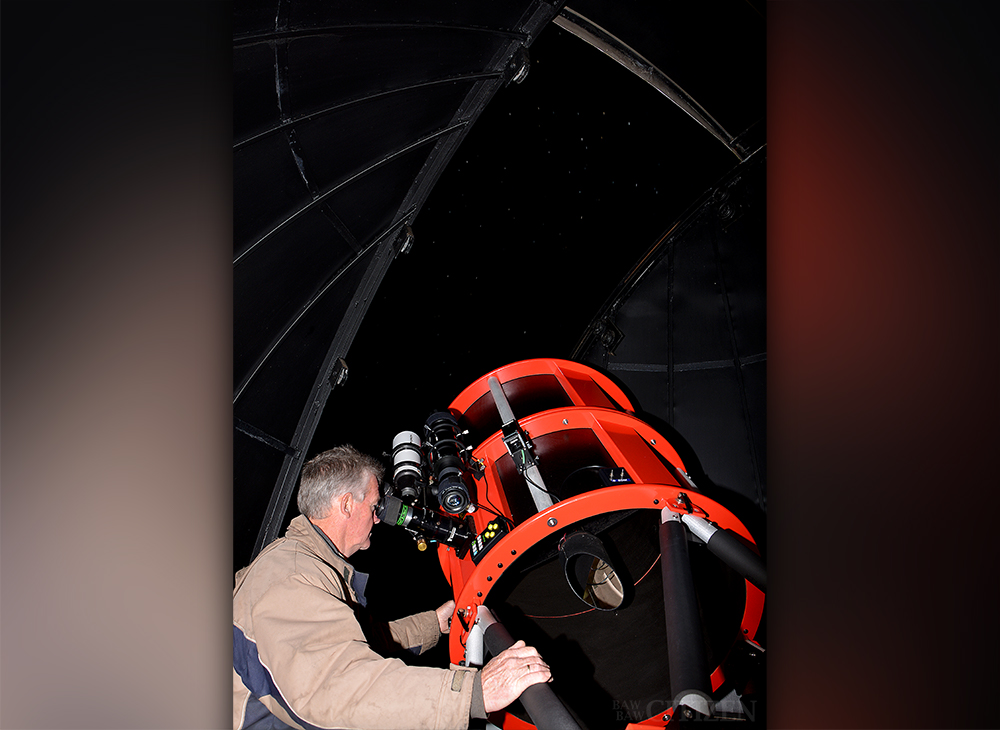 Baw Baw’s own black hole finder, Rod Stubbings, will soon record his 300,000th observation. We caught up with him at his observatory.

This feature was first published in the Baw Baw Citizen’s 14 June 2018 print edition.

Rod Stubbings spends a surprising amount of time looking through tubes. The Tetoora Road man’s day job as a plumber pays the bills, but for the past 32 years he has spent his nights studying the stars.

But we’re not talking laying back and watching; from his scratch-built home observatory, Rod searches for changes in light from variable stars and reports his findings to professional astronomers.

He has even discovered a black hole.

“People are actually quite surprised when I tell them what I do,” Rod told the Baw Baw Citizen.

“I was doing a sewerage job for a client and I talked about astronomy and what I do, and they said ‘oh, you’re a dark horse you are!'”

Rod got into astronomy in 1986 with a telescope ordered from Reader’s Digest.

“I started fairly late, I was probably 31 when I first had an interest in astronomy. I wish I had started when I was a lot younger,” Rod said.

“Basically I wanted to look at Jupiter and Saturn. I bought my first telescope, took it out, and wondered ‘where are the planets?’

“I couldn’t find anything. So I bought a book on astronomy without a telescope and learned the sky from a book, and then that told me where to find the planets.

“So I finally found them and then started to learn all the stars, and basically self taught myself the whole sky.” 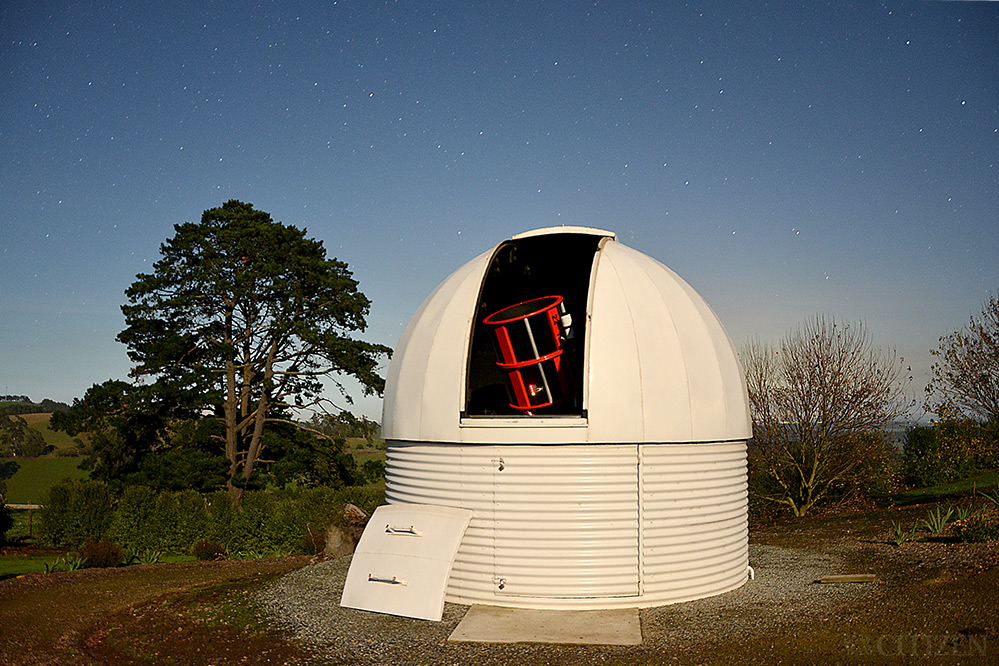 Rod can navigate the night sky in the same way most of us can find our way around a map of our town. It’s impressive – he can pull Jupiter, Saturn, or umpteen other planets, nebulae, or other objects into view at a whim. But it’s variable stars which have most of his attention.

“After a couple of nights looking at planets you kind of get bored of it, so I stumbled on variable stars, [through which] you can actually make a contribution to science.

“I was spending that much time out there, I thought I might as well make it worthwhile.

“I concentrate on the explosive stars,

…and their physics is of particular interest to professionals.”

Rod notes down his observations and sends them to the American Association of Variable Star Observers, as well as the Variable Star Network – a global professional-amateur network of researches in variable stars. Last month he celebrated the 25th anniversary of his earliest variable star observation recorded in the AAVSO International data base.

To help him make his observations Rod uses a 22″ telescope, which allows him to see very, very deep objects.

Deep in this context doesn’t necessarily mean far away, it’s more about the brightness of stars.

“If you look at the stars at night with your eye, the brightest stars have a magnitude of one; that’s a bright star,” he explained.

“Then as they get fainter you go to magnitude two, three, four, etcetera. The faintest star you can see with your eye is magnitude six under a reasonably dark sky.

“With this telescope I observe and study stars at magnitude 17 easily, so I’m looking deeper into our galaxy.”

The telescope allows Rod to measure whether any of the hundreds of stars he monitors have changed in brightness. It was these observations which led him to discover a black hole.

“I recorded the brightening of a star called V4641 Sgr, and sent out an alert notice that attracted immediate attention around the world,” Rod recalled.

“There were x-rays coming from that part of the sky a month before and they didn’t know where they was coming from, so that night they turned the Rossi X-ray Timing Explorer satellite onto that star. There were x-rays pouring out of it and they said ‘that’s not normal. Normal stars don’t do that.'”

“The next night all the radio telescopes around the world looked at it, and they realised there was a black hole sitting beside that star and gobbling up part of it.

“It only lasted for one night. When I saw it I recorded how bright it was, the next night it had already faded.

“To this day I’m still the only one who’s ever seen it that bright.”

Unsurprisingly, monitoring stars takes a lot of patience, but the rewards can be very satisfying.

“I found a new variable star once,” Rod said.

“The star was called WR 53, a massive star 25 times greater than our Sun. I had been watching it for five years because someone said it could vary a bit but it’s been recorded and documented as no variation whatsoever.

“I’m pretty patient so I just kept looking at it, and after five years I noticed one night it just dipped, it actually had an eclipse. So I got credited with the discovery of a new variable star, and I wrote a paper on my findings and got it published.”

Rod has memorised some 700 different stars that he observes during the course of a year. Not only has he memorised their names and locations, but also their magnitudes.

“If you break that number down that’s probably 30 observations on every night for the past 25 years.

“I’m aiming for 300,000 by the end of the year. There are currently only three people world wide who have made 300,000 observations in the past 100 years of variable star astronomy. There was Albert Jones in New Zealand, he’s passed away, and two Japanese observers, Hiroaki Narumi and Taichi Kato, who have done over 300,000. Hiroaki Narumi is still observing.

“There’s Gary Poyner in England, he’s getting close to 300,000, and he’s been observing for over 45 years. I think I will be the fastest observer to ever do this, in a time frame of 25 years.”

Rod describes the 300,000 observations as “a little goal” he has set for himself. It’s a huge figure, but still a good way short of one of the people he has most admired in the field.

“Albert Jones is a legend in visual variable star observing, he did over 500,000,” Rod said.

“He was observing from about 1960 and went until he was 92, when he passed away.

“In the last few years before he died, I got to know him pretty well. He actually contacted me and said he admired me for what I was doing […] recording exploding stars. I documented a lot of new stars that had never been observed before, found out how they behaved and this revealed the true nature and reclassification of such stars. So he was envious of me and coming from Albert that meant a lot.

“Before he died, he gave me a whole list of his stars he wanted me to actually observe for him because he wanted to keep the historical light curves going. I still do now with respect to Albert.” 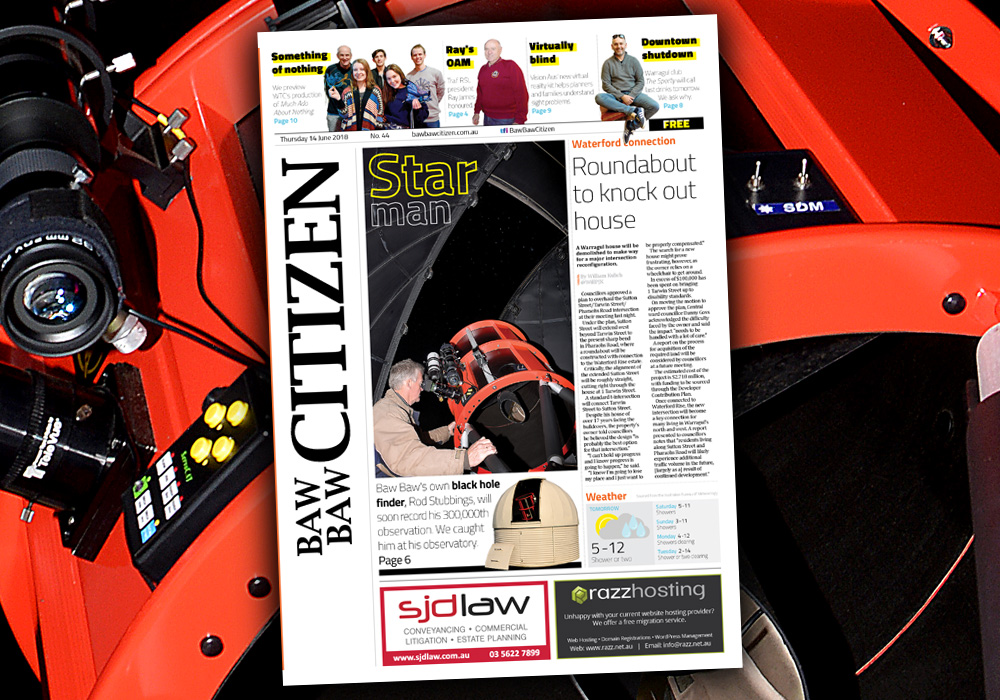 Baw Baw’s skies provide a good foundation for Rod’s work, although urban growth has created more light pollution. Rod even moved away from Drouin to Tetoora Road in order to avoid light from new estates.

“Over the years I’ve noticed light pollution is increasing, from Melbourne and the Latrobe Valley, but generally there’s still a pretty good dark sky out here,” he said.

“Things have changed quite a bit in the west, around where Pakenham is. I’ve noticed that quite a bit, and of course there’s the new Pakenham racecourse now which is quite bright.

“We’re losing the night sky so gradually that people don’t quite realize what we’re giving up.

With reasonable skies, it’s actually kind of easy to get into astronomy. The key is learning how to find what you’re looking for.

“A lot of people don’t know the sky. I learned from books, these days people use apps. (Google Star Map is a good example.)

“You’ve got to go out regularly to know the sky; people go out just once and look at it and think ‘that’s good,’ but I suppose you have to be a bit more hooked to go out night after night.

“Just learn the sky so you can recognise some of the bright stars, and just keep learning. There’s a lot of good objects you can see out there with even just binoculars or a two inch telescope.

“You can see Jupiter’s four moons in a pair of binoculars.”

You can find out more about Rod, his observations, and his observatory, through his website, rodstubbingsobservatory.wordpress.com.