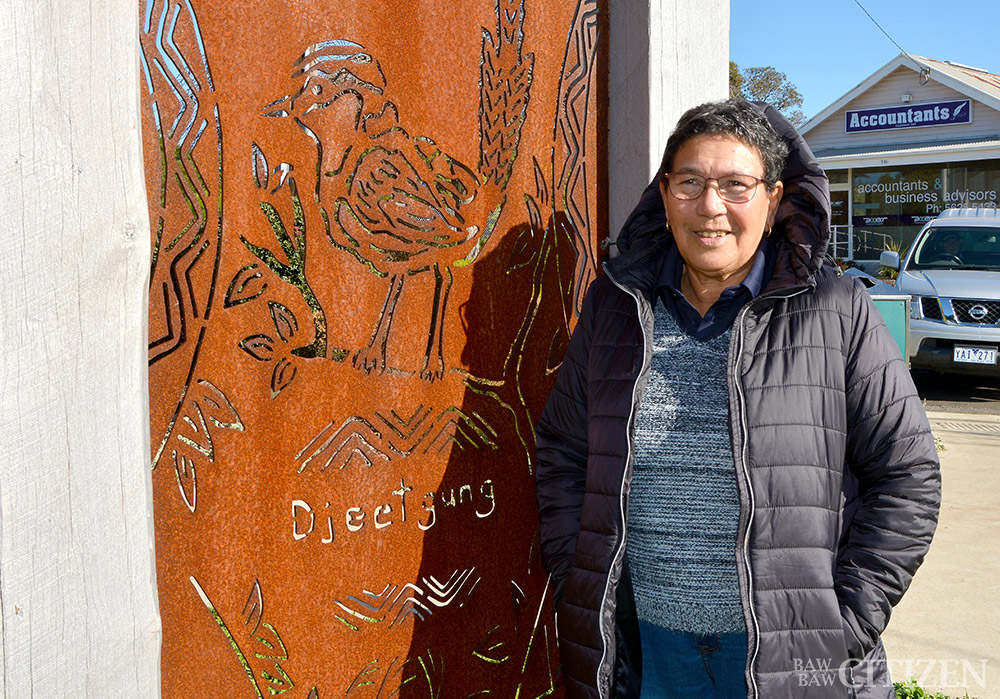 This story was first published in the Baw Baw Citizen’s 19 July 2018 print edition. Get your copy free from retailers across Baw Baw!

The annual event celebrates the culture, history, and achievements of Aboriginal and Torrest Strait Islander peoples, and in Baw Baw the Kurnai community ran events with 2018’s NAIDOC theme: “Because of Her, We Can!”

We caught up with Kurnai elder Cheryl Drayton [the week after] to discuss how it all went.

Cheryl: It went extremely well. There was plenty of activity and plenty of community members participating in a variety of short sessions. It has probably been the best year, and I think the theme was just so good because it really resonated, “Because of her…”.

I think if you look back on all of the Aboriginal women who you see working hard to make a difference in their community’s lives. There are a lot of outcomes, they’re not big outcomes but they’re consistent and the relationship between non-Aboriginal people and Aboriginal people is closing to some degree.

Cheryl: I was really, really stoked with the turnout.

We had an elders lunch up at the Anglican church as part of reconciliation leading into NAIDOC Week as well. We had over 100 people, and the theme behind it was, again, “Because of Her”, and it was a bit of a Q&A so non-Aboriginal people could ask questions around our lives growing up here in West Gippsland and some of the changes.

We talked about what our mothers were able to achieve and so on. I always tell the story that we had to be absolutely dead before we could not go to school, because her thing was ‘it’s a white man’s world, and we have to be able to walk in and out of both our world, black and white.’ So always be proud of your heritage, but it’s about being able to work with white people and get on with your life. I think it was good.

BBC: Which other strong women have played a big part in your life?

Cheryl: My grandmother (Dorothy Hood) was another one. If you go back to tribal days, and this is the essence around it, our apical ancestor, her tribal name was Yowillii, came from around Lakes Entrance, and she had the tribal scars to be able to do that. She was the one who kept her family afloat in colonisation, so instead of being involved in the massacres and those sorts of things, she absolutely kept everybody safe.

In those days when people came out to see, and I’ll call them blackfellas, on the mission, she used to make the baskets and sell the baskets as part of an economic process where she could go and buy the food she wanted to buy rather than have the rations.

I say to people, what sort of a society are we building? My effort is ‘okay, it was a sorry thing what happened to the invasion, but at the end of the day we have to learn to co-habitate and we have to be able to respect each other, and if we don’t do that in all parcels of life then what kind of society are we actually building?

I make those points, and I think you have to look at the elements of what societies bring and do and sometimes they dissolve things and then they build them back up and they knock them back down again.

BBC: How do you feel that relationship between Aboriginal and non-Aboriginal people is at the moment?

Cheryl: I reckon it’s absolutely fantastic, because the support we get here in Drouin, you only have to look at this sort of artwork (we’re sitting in Drouin’s Memorial Park, which features several works of art by Aboriginal people), which is a collaboration between the shire and the veterans and the RSL, and that document there is about the frontier wars. Those [artworks] were put up there because we were on the committee for the [redevelopment of this park]. We’re having a conversation around the frontier wars and what they meant, and the recognition that our people also fought for this country. It’s a collaboration.

And people are now wanting to know more about Aboriginal culture and what it means. I see the non-Aboriginal people wanting to do the support, wanting more knowledge, wanting to be able to come and contribute. I am so stoked that we’ve been able to achieve so much, and we are continuing to achieve.

The important thing for working collaboratively as a minority group is to actually engage and to have that connectedness, and for me that connectedness is working with the Baw Baw Arts Alliance, it’s working with and being on committees, and showcasing Aboriginal language and so on so that it becomes more inclusive and people are wanting to know more. There are some people who are never going to want to do that, but the majority of people are engaging and are wanting to know more.