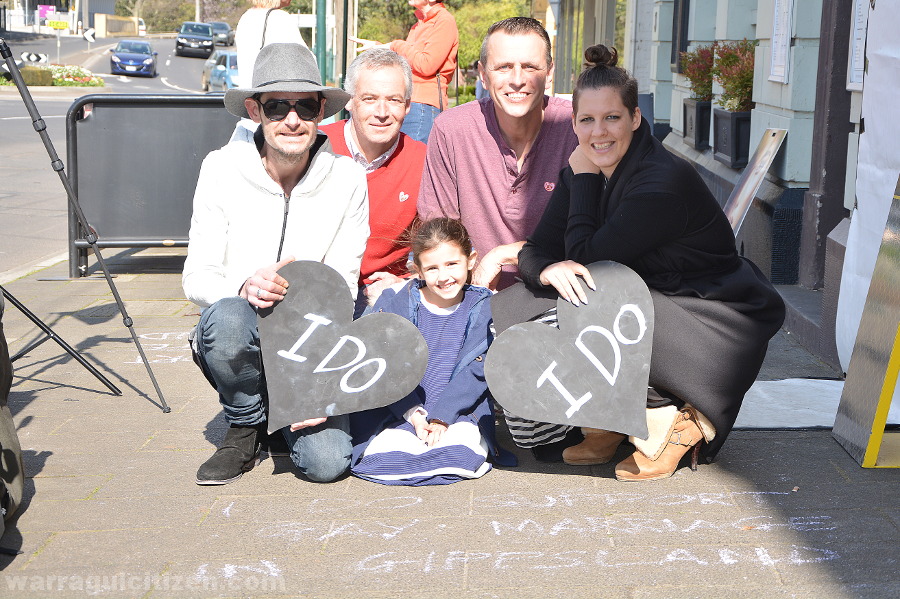 GIPPSLAND // WHEN most people think of a petition they imagine clipboards, pens and spreadsheets, but for one group of Gippslanders a petition can be a much bigger statement.

Above: Corey Alexander, Kevin O'Bryan, Gia Collacchi, Martin Baldock and Pollyannar Gibson at the photo shoot. The chalk on the pavement reads 'I do support gay marriage in Gippsland.' Photo: William PJ Kulich.

First published in the 28 August 2015 edition of the Warragul & Baw Baw Citizen.

Led by photographer Pollyannar Gibson, who grew up assembling family photos for people who could not be together by using a plain white background, the Sale-based group has photographed supporters in their home town, Traralgon, Bairnsdale, Walhalla and, last weekend, Warragul.

Over 50 people were photographed for the Warragul shoot, adding to Walhalla’s five and Sale’s 100.

“The response has been overwhelming and it’s been people from all demographics,” Pollyannar told the Warragul & Baw Baw Citizen.

“We never anticipated such a diverse group of people would come out and support.

“There have been a lot of families, which has just been great.”

The group set out with a plan to photograph people from across Gippsland, and will soon set up in Kilcunda, between Phillip Island and Wonthaggi.

“We definitely want to cover as much of Gippsland as possible. We all have jobs, so this is done in our spare time,” Pollyannar explained.

“This is my second big picture. I do them to help put a face to the statistics and give the general public an opportunity to just look at pictures and think ‘oh, well how actually do I feel about this

issue, and these are the people who support it, so maybe it’s not so bad.’

“We’ve been invited to most towns, so it’s not like we’re banging on doors.

“It’s about starting a movement and giving it to the people, and saying ‘well we’re here, let us know what you want.

Unsurprisingly, the group has recieved harsh criticism from conservative parts of society, but that has not shaken their motivation.

“We’re not here to change anyone’s opinion, we’re just here to inspire a bit more understanding and to support our local gay, bi, transexual, transgender community by showing them that they are loved and everyone supports them.”

Fellow campaigner Martin Baldock added: “everyone’s entitled to their opinion, and I think some of the haters they want to focus on the children, but it’s about marriage equality plain and simple, it’s not about how children are being brought up because that argument, even within straight society, is not a good argument.”

“There is absolutely no research to back it up. I’m in a same sex relationship and I have a nine year old son who understands exactly what we’re doing and supports what we’re doing.

“He’s nine, but he understands that both his parents want to get married and he wants to be like the other kids at school. And he wants to wear a blue suit at the wedding.”

That feeling of inclusion is a common theme; the group recently met a mother of two gay children who wanted “the same right as the woman next to her to go to her children’s weddings.”

The campaign has a strong social element to it, but also has a political role. Recently Gippsland Nationals MP Darren Chester and Gippsland-based independent senator for Victoria Ricky Muir have expressed their support for marriage equality. The big picture and associated traditional petition – Martin said “the photo itself is a petition, but we also wanted to get a hard copy; the petition is just confirming… the people are locals” – are intended to support those MPs while empowering the community.

“We have behind it Darren Chester and Ricky Muir, who basically did the right thing and asked the people of Gippsland what they wanted, and a huge amount showed they wanted marriage equality,” Martin told the Warragul & Baw Baw Citizen.

“It’s about giving all the Australian people the right to marry who they love, and everyone having the same rights.”

Mr Broadbent does, however, support a conscience vote on the issue.

The big picture campaign using the images the group has taken will launch in November.

“Originally this was just a digital campaign through social media. We’re now going to try to print the print,” Pollyanar said.

“It’s pretty exciting stuff. I’m still not 100 per cent sure my printers can print a photo like this but we will give it a shot.”

Magazines of the photos will be printed and the group has just registered its interest in using the image as a float in the Sydney Gay and Lesbian Mardi Gras.

You can keep up with the project on Facebook, just search for “I Do Support Gay Marriage In Gippsland”.