We are taught from school empty rooms need no light, but have you compared that lesson to what we do with public lights when no one is about? Baw Baw Shire Councillor Tony Wolfe has – so much he has written a landmark report suggesting council switch some lights off.

“What I would like to see happen is Baw Baw used as a bit of a model for what can be done elsewhere,” says Cr Wolfe.

“My idea is around reducing the amount of lighting that we currently provide. There’re a few benefits to that, obviously we’re trying got be more energy efficient and more green in the fact that we reduce our emissions. The best form of energy efficiency is to turn them (the lights) off. Not to reduce the usage; turn them off altogether.”

An electrician by trade, Cr Wolfe works at Loy Yang power station when not occupied with council business. Often taking the night shift he has direct exposure to the amount of energy being used by street lighting, which has made him question if roads need the lighting they get. 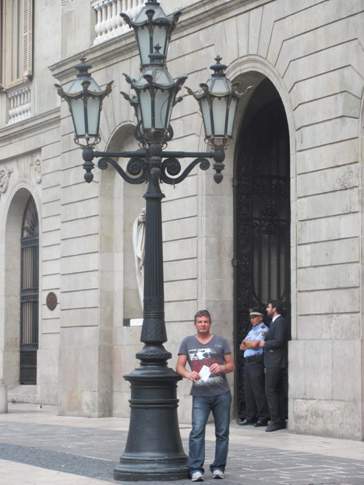 Cr Wolfe conducted a research tour of Europe and America late last year to investigate sustainable street lighting projects, and in a report for the MacArthur Fellowship outlined a plan for the Baw Baw Shire Council to become an Australian test case for the lighting reductions he saw being made overseas.

Cr Wolfe’s report recommends the Baw Baw Shire adopt a scheme like that in Santa Rosa, California, to remove unneeded lighting and reduce costs; a move he knows will take some convincing.

“That sounds scary for people because the perception of public safety and lighting goes together,” says Cr Wolfe. “I’m not talking about turning all lights off by any means, but doing an audit of the amount of lights that we have and whether we actually need them or not and what’s the purpose of having those lights there.”

Managing Director of Ironbark Sustainability Paul Brown said the idea does have risks, but if carefully implemented could have a positive effect.

“All I’d say to Baw Baw is they need to be careful with how they would approach a program like that. I would suggest that they should take it very slowly. They’re potentially leaving themselves open for risk and liability if an accident occurs in those locations, but having said that that, that doesn’t mean that it’s not a good idea.”

And progressing cautiously is exactly what Cr Wolfe has planned.

“What I’d love to do is get the cooperation of a couple of streets [where] the residents [are] happy to trial either turning some of their lights off or putting them on timers so they turn off in the early hours of the morning when nobody’s using them… and [building] some data around that,” Cr Wolfe said.

Cr Wolfe is also pushing for new energy efficient street light globes to be installed, so even if lights can’t be switched off he hopes Baw Baw’s streets will experience the same transition to energy efficient bulbs households have already undergone.

And progressing cautiously is exactly what Cr Wolfe has planned.

“What I’d love to do is get the cooperation of a couple of streets [where] the residents [are] happy to trial either turning some of their lights off or putting them on timers so they turn off in the early hours of the morning when nobody’s using them… and [building] some data around that,” Cr Wolfe said.

“The MAV would encourage councils to meet the Australian Standard for lighting, which is provided for the purpose of improving community safety”, says Cr McArthur.

But the idea does have the support of local community environmental group the Baw Baw Sustainability Network.

“We certainly support Tony’s efforts and I think the lights could be turned off say between midnight and 4am,” says the network’s President Malcolm McKelvie.

Cr Wolfe says the “aha” moment for his interest in efficient street lighting was when flying over an American city and seeing vast stretches of unused well-lit road, when only the pedestrians needed light.

“If you look at the parts of the road that are actually being lit, they aren’t for pedestrians at all – they’re on the bitumen in the middle of the road,” Cr Wolfe says.

If you are interested in the lighting plan and run into Cr Wolfe around town, ask him if you can see his report; he carries a copy around with him almost everywhere he goes.

One response to “Councillor’s bright idea for a darker night”