THE BUSINESSES, THE council, the developer. It’s the western-style showdown dividing townspeople and driving newcomers and business away.

For over a decade the former Petersville Milk Factory on Queen Street has been a political talking point evoking strong responses from townspeople and the business community. 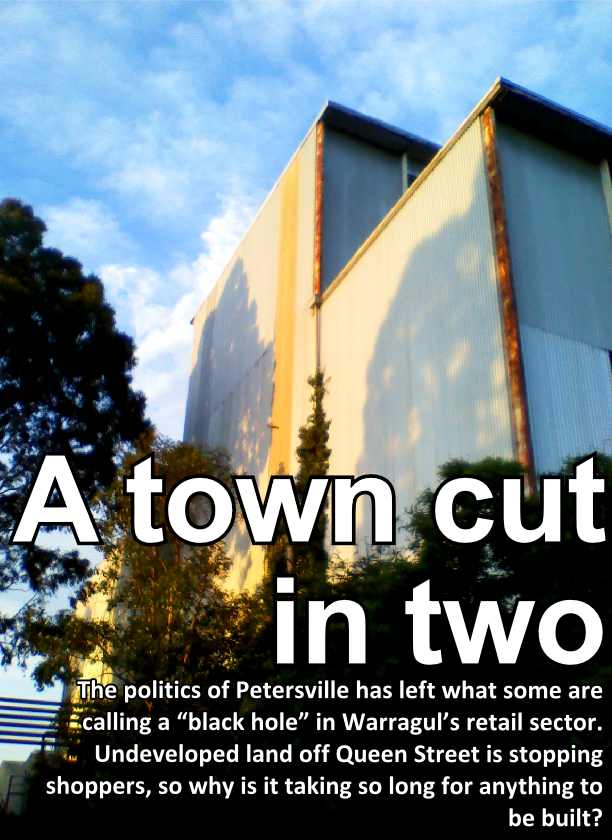 The factory, once a part of Warragul’s thriving dairy industry, is now the scene of a fight between the Baw Baw Shire Council and the site’s developer and owner. The developer has planned a multistorey mall-like shopping centre for the site and adjacent land, while the council has outlined different plans in the Warragul Town Centre Masterplan.

Caught in the crossfire are local retailers, some itching for customers to stay in the town with the proposed development of a shopping centre, others simply wanting to be part of the town. But businesses do agree the disused factory, opposite a car park and the railway line, is creating a “black hole” in retail frontage that is splitting the town in two.

But who is causing the delays, and what is the future for businesses and the town if this site is or is not developed?

“Probably the biggest concern… is it creates somewhat of a black hole between existing developments, or the existing CBD, and those developments that are occurring further down Queen St,” says Warragul Business Group spokesperson and former president David Cann.

“The concern is if sites like that don’t develop and [larger] retailers still want to come to town is where they end up? Do we end up splitting our retail sectors between Warragul and Drouin, do we end up with standalone sites like what happened in Morwell because there was a lack of development in the main precinct?” Mr Cann asks, before issuing a stern warning on how development should proceed. “A standalone site is going to kill any small town.”

For one local business with shop frontage in both the CBD and on the other side of the old “Bonlac” site, as many refer to it, the delay in redevelopment of the site has thwarted business plans. The business owner, who has declined to be named amidst the politicking of the issue, bought the land expecting development would have happened by now.

“I think it was just more the timeframe. It has been undeveloped now for such a long period of time, it was always touted as the next major development and so we thought… this would be a good spot to be, because over time people would come down there, and it’s still sitting there,” says the business owner.

The business owner, who has lived in Warragul their entire life and has seen development stall, says the council has done as much as possible to force development on the land. “I still think it’s obviously years away so I don’t know how they can go about forcing somebody to do it,” they say.

So whose fault is the stand-off? According to the developer, whose planning permit for a shopping centre expired in November 2010 and was refused extension, the council has been causing the delays. The council says the developer was stalling. The claims are hotly disputed, with the developer raising the issue to VCAT.

VCAT’s decision did not help them, with the tribunal naming the developer as the cause.

That developer is Warren Turner. A hard-bargaining landholder and owner of Warren Turner Vehicle Sales, Mr Turner began purchasing the plots of land which would become the expansive empty block that divides the town in 1998. His first purchase was the Petersville Milk Factory – abutting Queen Street, the factory is the public face of what many consider a chasm swallowing the viability of business in the town. His most recent and final purchase was made in February 2005. He applied for a planning permit later that month and received it in November.

In this time Mr Turner was involved with several other sites. He was director of Livestock Marketing Australia, which bought the Warragul cattle sale yards not far from the factory in March 1999. The new ownership was to be relatively short-lived. Two years after the takeover, a disagreement between Mr Turner and stock agents led to Mr Turner locking them out. The agents had been looking at moving to different sales yards. Police were called in to keep the agents out, and they didn’t return until the site was sold to a new owner in May 2002. Mr Turner’s decision to lock agents out only encouraged them to hold sales elsewhere while the dispute continued. 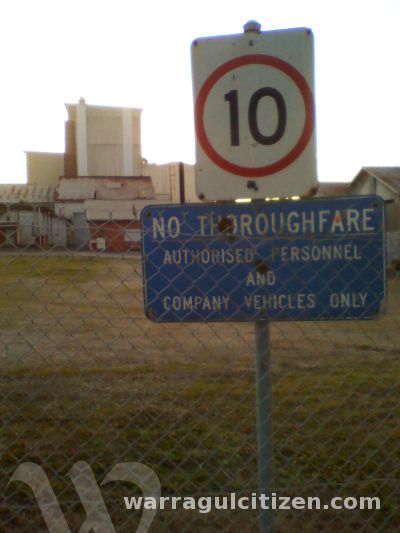 Mr Turner is moving more cautiously this time, declining to comment on most site issues at risk of jeopardising his latest attempt for a new planning permit.

Although initially supplying one comment on the issue for this article, the only comment from a three-and-a-half hour interview to be flagged as on the record, Mr Turner recently declined to comment. He says he is “not prepared to make comment through [this] article until [Planning Panels Victoria] has made a decision.”

But the Warragul Business Group is prepared to provide a detailed reason why Mr Turner’s last request for an extension failed.

“Basically the Town Centre Masterplan disregarded the planning permit that was currently being held by the developer and placed its own view over what should happen on that site,” says Mr Cann.

“If that planning permit wasn’t enacted and it lapsed, the council was never going to extend it because they wanted to see a different development in there.”

On top of that, the council is driving a hard bargain.

“Now the planning permit is no longer in existence, it allows for [sic] a bit more lateral thinking as to what can happen on that site,” says Baw Baw Shire Mayor Diane Blackwood, but it seems the council might have already done much of that thinking for the developer.

The Masterplan outlines the council’s own vision for the entire town, including Mr Turner’s land. Plans include a multi-storey car park, the extension of Palmerston Street through the middle of the site and a small amount of residential development -effectively killing the mall-style layout proposed.

“It’s a prime site that needs to be developed sooner that later, but of course it needs to work in with whatever’s happening around it as well,” says Cr Blackwood. In February Cr Blackwood said the “community is being unfairly penalised because of this site remaining undeveloped.” Three months later nothing has changed.

The factory has occupied its Queen Street frontage since 1923, only closing operations near the end of last century. If the future of the site was uncertain in the 1990s, it is still much the same over a decade later.

Much attention has been given to what the site might be used for now, which might see Warragul unified or compromised.

If what is ultimately built on the site is not properly linked to the rest of town, Mr Cann believes the division seen at the moment could be cemented in.

“If you put a development on that site without working on those linkages, particularly pedestrian access between those two sites, then you will create a drive-and-park option where people will choose to go to one space or the other to shop or they will drive between the sites, and then that’s not going to help at all,” Mr Cann says.

But no matter what happens, the council is optimistic the wait will not be much longer.

4 responses to “Warragul: A town cut in two”